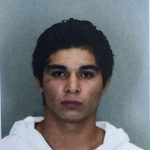 In a media alert Wednesday afternoon, the Fairfax County Police Department says there is no credible information to link 22-year-old Darwin Martinez Torres, a Salvadoran national living in Sterling, with any gang.

“Homicide detectives investigating the murder of 17-year-old Nabra Hassanen looked into whether the suspect, Darwin Martinez Torres, is a gang member or affiliated with gangs, but have found no credible information to support any connection. The case remains active and we will release additional information as we can. Martinez Torres remains at the Fairfax County Adult Detention Center.”

FCPD has worked to combat rumors throughout its investigation into the brutal killing last Sunday morning. It has also repeatedly shot down community insistence that the Muslim teen’s slaying was hate-motivated. Rather, they’ve said, Torres was experiencing extreme road rage when he drove onto the curb, exited his vehicle with a baseball bat and attacked.

Nabra’s violent death has struck a chord within the community at large. A crowd in the thousands came out for a vigil in her honor last week at Lake Anne Plaza.

Irving Middle School students wear face masks in class (via FCPS) Updated at 11:50 a.m. — The Fairfax County Board of Supervisors voted 8-1 this morning to support the continued mask…