As the community continues to recover after last week’s brutal killing of a Reston teenager, one activist says the psychological impact on surviving youth will live on.

“For many of us in Northern Virginia, it’s really during Ramadan where we carve out special places to feel like home,” said Aya Saed, a Harvard Law School student and organizer for the Deeply Rooted Retreat for Black Muslim Youth. “For the crime to have happened in this moment is really quite traumatic to young people who are just starting to creating safe spaces for themselves and forever.”

Saed and other prominent members of the area’s Muslim community appeared on “The Kojo Nnamdi Show” today on WAMU to reflect on the slaying of Nabra Hassanen and discuss its implications on a future generation of Muslim children.

Nabra, 17, was attacked and abducted in the early morning hours June 18 while walking back from McDonald’s after an overnight service at the All Dulles Area Muslim Society. She was beaten to death and her body was found in a Loudoun County pond. Fairfax County police say that her killing followed an extreme case of road rage.

“Any time this type of incident happens, it runs deep,” said Joshua Salaam, ADAMS Center chaplain, of the community atmosphere following Nabra’s death. “Any individual can point back to five [or] six incidents in the last year where the victim was a Muslim.” 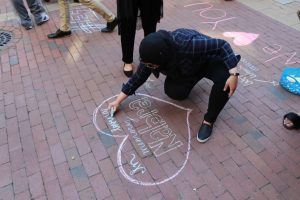 Carmel Delshad, a news producer for WAMU, said young Muslims are fearful in a time when violence against them appears to be increasing.

“I think mosques are doing what they can to ensure extra security measures in place,” she said. “People are looking over their shoulder [and] they’re taking self-defense classes just to be prepared.”

Saed said that kids Nabra’s age, both locally and elsewhere in the country, have been rocked by what happened to her that morning.

“It’s worth talking about the kinds of psychological impact this is having,” she said. “For many young Muslims, this is the only reality that they know in the United States.” 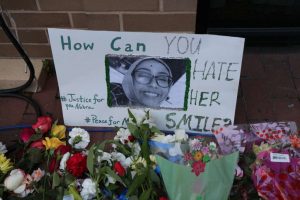 Despite continued police insistence that they have no evidence pointing toward anything that would officially constitute a hate crime, some members of the community feel differently about the motivations of the suspect, 22-year-old Darwin Martinez Torres.

“It’s virtually impossible to point out someone’s intent,” Salaam said. “The evidence suggests that while there was road rage to incite the man to get out of the car, there was something else at play to carry out the alleged sexual assault and murder of Nabra.”

Salaam said the crime has brought about a “general hysteria and fear” in the community. He added, though, that the community has faith in the work of the Fairfax County Police Department.

The immigration status of Torres, a Salvadoran national who was living in Sterling, has also been a hot topic since Nabra’s death. George Escobar, senior director for Health and Human Services for immigrant support group CASA, said there are no correlations between immigration status and increase in crime.

“Consistent studies have come out stating that immigrants are much less likely to commit crimes,” Escobar said. “You see tragic situations like this, and you start to see innuendo and right-wing elements interceding and painting another picture.”

Salaam said not a lot is known about Torres.

“I’ve spoken to neighbors [of Torres] that have said there’s been no indication of violence,” Salaam said. “He’s a total question mark.”

Salaam continued on to say that the Muslim community believes it is important to get to know other people from different backgrounds and learn about them.

“When you don’t, all you know about them is something you’ve heard from the media,” he said. “We have a long-term agenda to get to know one another better, whether you’re American by title or not. You still live here.”

More Stories
This is the Last Week for Il Fornaio at Reston Town CenterPlot Holes: Space Available in RA Gardens With No Wait