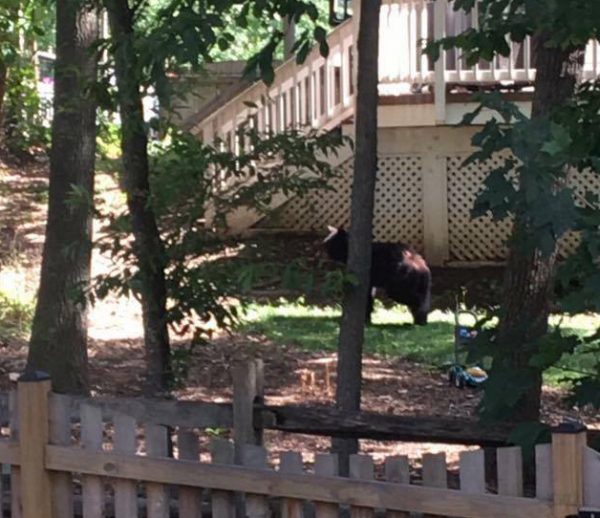 Reader Mel Davidson shared the above photo of a bear that was spotted over the weekend near Reston.

Davidson said the bear was seen Saturday afternoon in the Stuart Ridge community, which has a Herndon address but is located near Fairfax County Parkway in the area of Reston’s Lake Newport Road.

The Fairfax County Police Department posted on Facebook on Sunday that there have been “several reports of bear sightings in park[s] and residential neighborhoods throughout the county.” According to police:

Bears typically avoid humans, but may wander into suburban areas in their search for food. Bears can cause serious property damage and if they lose their fear of humans and pose public safety concerns, they may have to be destroyed.

If you encounter or see a bear, do not approach it. Back away slowly and ensure it has an escape route. If a bear huffs or “woofs,” clacks its teeth, growls or slaps the ground, it is warning you that you are too close.

Conflicts with bears can be avoided by removing unnatural food sources. The most common are birdfeeders, garbage, compost piles, fruit trees, berry-producing and pet food left outside.

FCPD says bear sightings should be reported to the Virginia Department of Game and Inland Fisheries by calling the Virginia Wildlife Conflict Helpline at 855-571-9003, or to the county’s Animal Protection Police by calling 703-691-2131.