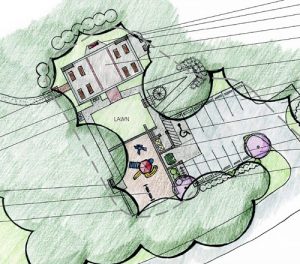 Representatives of the group will address RA’s Board Operations Committee at their meeting tonight as they seek approval from the Board of Directors of a new design plan, as well as the release of the remaining funds allocated for the Implementation & Construction phase of the project.

The Pony Barn Parks are located at the corner of Steeplechase and Triple Crown roads in the Hunters Woods section of Reston. There is a picnic area and pavilion on the north side of Triple Crown Road, with a butterfly meadow on the south side.

According to information provided by the Pony Barn Working Group:

Access to and through the park is limited by the lack of sidewalks. The pavilion and other amenities are not accessible to people with disabilities. The gravel parking lot is an impediment to people with strollers, wheelchairs and bicycles. The picnic pavilion remains much as it was almost 30 years ago with fewer amenities. Despite its many limitations it is used by RA summer camps, Girl Scout troops, students at Hunters Woods School, families and friends having get-togethers, and parents swinging their little ones. People frequently park at the Pony Barn lot so they can walk through the Glade Valley Stream Park.

A pavilion replacement was first approved by RA in 2013, at a cost of $30,000. RA later approved, as part of the 2016-17 capital projects budget, $350,000 for a full-scale renovation project. That money has been locked up since last July, however, when RA put major capital projects on hold in the wake of the controversy over the Lake House purchase.

Now that an independent review of that purchase has been completed and RA is working toward remediation, the Pony Barn group is bringing its project is back to the table.

Since the project was put on hold last summer, the Board did allow stormwater management planning work to continue. Project cost estimates were provided to the working group in January, according to information they will present to the BOC, and it was “determined the costs were too high.” Civil engineers were then “instructed to minimize the footprint to reduce grading and related costs,” according to the working group.

The revised design the working group will present reflects many of the original goals of the project, including a focus on accessibility and the addition of a butterfly meadow overlook. A handful of items have been removed, however, including: