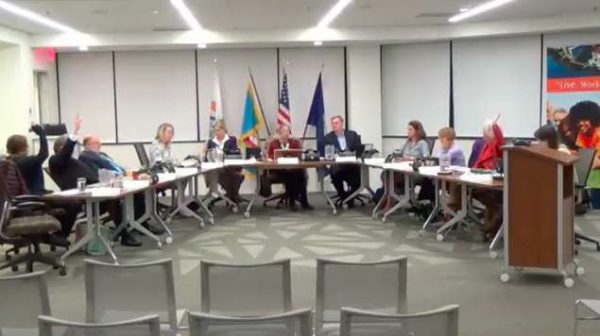 The vote was not unanimous, but the Reston Association Board of Directors decided Thursday to begin working toward a plan of action to adopt the recommendations in StoneTurn Group’s review of the Tetra/Lake House purchase.

Following a public meeting on the issue Monday, it was proposed Thursday that CEO Cate Fulkerson and her staff draft and develop the implementation plan for board consideration at their May meeting. The plan is to take into account the recommendations in StoneTurn’s report as well as all input received from the community at Monday’s meeting, and it is to be designed to have all recommendations ready to be implemented by September.

“It is to share with us what needs to be done, even shifting some of [Fulkerson’s] goals down the road in order to make implementation of the recommendations from StoneTurn an absolute priority,” said Director Michael Sanio, the board’s vice president and a member of RA’s Tetra Review Committee.

The recommendations made by StoneTurn include the drafting of new foundational documents that have an overreaching principle statement to define ethical concerns that may arise during transactions such as the Tetra/Lake House purchase and renovation.

The September deadline was an issue of contention for Director Sherri Hebert, who said the timeline seemed too tight for the amount of work that needs to be done. In addition, she said, the creation of a task force and a community review group should be part of the remediation process.

“[They need to have] an oversight role to make sure that these things are getting done,” she said of the recommendations. “We’re trying to build that trust back with the community, and the community needs to be involved in this implementation.”

Director Ray Wedell said the creation of the task force should be done “immediately.” Other directors stated that if a task force is to be created, it should be the decision of the incoming board in April, after the election. Four new members will be a part of the nine-person board.

Fulkerson said the Board of Directors will have funding issues to consider during the implementation process, as well.

“There is a lot of it staff can do, but there are some things where I’m going to need outside expertise,” she said. “That’s going to cost you money, and you’re going to have to take that up and decide if that’s what you want to do.”

The motion passed by a vote of 5-3, with Hebert, Wedell and Lucinda Shannon voting against it. Director Jeff Thomas was not present.