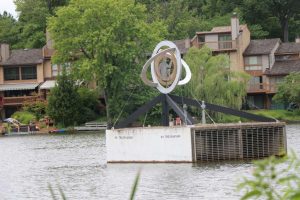 For the fourth year in a row, South Lakes High School’s STEAM Team Art Club has designed an art display for Lake Thoreau.

The STEAM Team (science, technology, engineering, art and math) was challenged with creating a kinetic work of art that included natural elements and enriched their community. They came up with “Althea,” which they say represents all aspects of human rights.

The sculpture is made up of rings that rotate randomly, like the “constantly evolving nature and complexity of human rights.” There are concentric circles to depict orbital paths of the planets in the solar system. This is supposed to “reinforce how deeply connected humans are to each other.”

Students were involved in every step of the project with the help of art teacher Marco Rando. They presented three concepts to Public Art Reston and considered their input when they choose the design. The students then produced digital and physical three dimensional models, that were also presented to the board for approval. The Reston Association Design Review Board provided feedback on the final design.

The sculpture is made of galvanized metal, plywood, wire rope and spray paint. It is being displayed on the 19-square foot concrete spillway on Lake Thoreau, visible from South Lakes Drive.