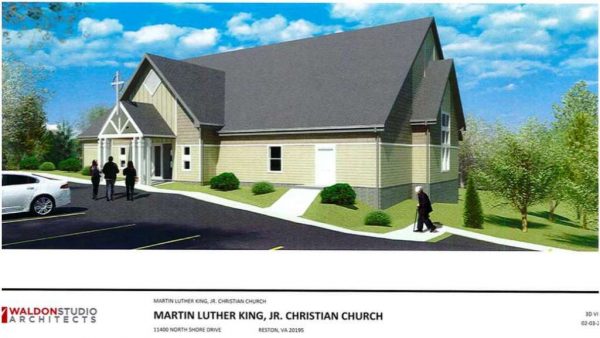 The long journey toward a permanent building for Martin Luther King Jr. Christian Church (11400 North Shore Drive) is a little closer to its conclusion.

After discussion during Tuesday’s meeting of Reston’s Design Review Board (video), approval was given for the site plan for the 6,000-square-foot building. The new structure will be located on the opposite side of the parking lot from the current, temporary church building. The project still needs to go through the county approval process, along with further local approval.

Church representatives said they would like to keep the current building — a prefabricated double-wide structure — in place even after the new building is completed. They said the extra space would be required until an addition could be added to the new building.

However, Design Review Board members balked at that idea.

“I work with churches regularly, and I know every church out there would want to hold onto that building,” said Neal Roseberry, DRB vice chair. “Frankly, it’s our job as the Review Board to say, ‘Hey, it was temporary when it was approved over 10 years ago; it needs to come down now because you’re finally building your permanent church.’ That’s my position at least of why we should help you do what you said you were doing originally.”

The church is located between the Crescent Apartments and the Northgate Condominiums. DRB told the church representatives there needs to be more communication between them and their neighbors in regard to the development. Andrew Ivovich, representing the Northgate community, spoke during the meeting regarding the lack of communication.

“It’s much clearer what you’re proposing at this meeting … [but] I do, however, wish that it was presented with a little more time for us to review,” Ivovich said. “I’m glad you met with some of the community members, [but] we have not heard from you. We are your neighbors too, so we would love to sit down and meet with you guys.”

Ivovich, along with DRB members, shared questions about removal of trees and retention of a vegetative buffer.

“I think the site plan as you presented it is much more modest, [with] much less tree removal,” Roseberry said. “The landscaping along the path and paying attention to North Shore Drive is probably the biggest weakness in what’s still there.”

In addition to removal and replanting of trees, a portion of Reston Association’s Blue Trail would need to be moved for the construction. Larry Butler, RA’s director of parks, said there has been “good discussion” about those plans. He added that there is an RA easement that will need to be re-routed for the work.

The future addition to the proposed building, for which they are asking permission to clear space ahead of time, is also included in the church’s plan. Mel De Gree, representing the church’s building project, said it is hoped that it would be added within five years of the building’s construction.

The Design Review Board approved the plan as presented, with several conditions. Among those are the development of an updated landscape plan and meetings with the community members. Results of those conversations, along with other provisions from the DRB, are to be presented at a future meeting.

The full presentation packet provided to the DRB during the meeting can be downloaded from the Board’s website.