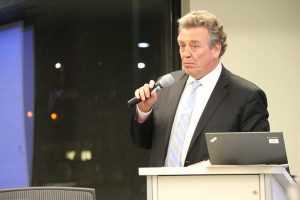 As input sessions on a proposed capital improvement project at Hook Road Recreation Area will soon begin, one member of the Reston Association Board of Directors has big questions.

Ray Wedell, an At-Large director who lived on Hook Road for seven years, has been adamantly against the project proposal from the start. He says the future of that park must be evaluated in a “deeper and more meaningful way” than what is currently being approached by RA.

In a five-page statement (download in full) that he recently presented to the Board, CEO Cate Fulkerson and RA staff members, Wedell argues the emphasis should be on preserving the “beautiful and peaceful open space” at the park rather than on enhancements to what he views as little-used facilities.

“I submitted this as part of the record before the first budget meeting, which I could not attend. I asked it be part of the record. Having heard nothing from any of the 18 recipients in the RA brain trust concerning my piece, I brought it up at the next budget meeting (very lightly attended), and again asked that it be included as part of the record,” Wedell told Reston Now. “Although politely added to the record, my sense is that it will be buried. The procedure to follow on this Hook Road project (and maybe even the ultimate outcome) [has] already been determined long ago. My opinions will be circumvented as much as possible.”

Wedell’s opinions focus in large part upon changes to the eastern portion of the property, which features four tennis courts, a tennis practice wall and a basketball court — all amenities the director says are greatly underused.

There are four tennis courts that are lit at night. There is amazingly little use of these courts during most of the year, as I have often documented. There is also no check that I can ever decipher that the few people playing there are actually Reston residents paying for the privilege. Alongside the tennis courts is a practice tennis wall, another wasted space rarely used. There is also a paved basketball court. This is almost never used.

Instead of renovating these facilities, which he says would be “expensive and unnecessary,” Wedell says they are perfect places to increase parking at the recreation area.

All of this territory can be beautifully re-purposed at minimal expense, and likely less upkeep. Furthermore, my proposal could draw heavily from private donations, whereas none of the retrofit projects to keep Hook Road as is would do so.

Wedell says adding parking spaces there, instead of finding space elsewhere on the property as has been suggested, would allow for more people to enjoy the activities that take place in the western portion of the property as it currently sits — which he says is a “wonderful open space for picnics, kite flying, frisbee with the dogs, exercise for younger supervised tots, and much more.” His argument is that this would make the park a vital community gathering area rather than “just another recreational area.”

This can easily be accomplished and would serve the needs of many more citizens. It would give many more people who do not use the tennis courts (the overwhelming majority of Restonians) a reason to think their assessments DO provide value. It clearly is environmentally robust.

At a time when Reston is literally fighting for its life against the seemingly insurmountable development forces, the establishment of such a park stakes a claim that we value our quality of life, and the citizens want to define how our community should look.

The director says the proposed redevelopment at Hook Road is “a golden opportunity for the citizens to call for a timeout and demand that we re-think the entire purpose of the park.” Wedell says there should be parks similar to his vision for Hook Road Park in areas such as Hunters Woods and the South Lakes District. He says the open-space park concept should be the new approach for Reston.

Rather than forge forward with the current debate on how to retrofit the existing structures at Hook Road, isn’t it time to take a “30,000 foot view” and determine what type of park best meets the needs of the overall community?

The first public meeting on the Hook Road Recreation Area project is slated for Aug. 29 at 6:30 p.m. at RA headquarters (12001 Sunrise Valley Drive).