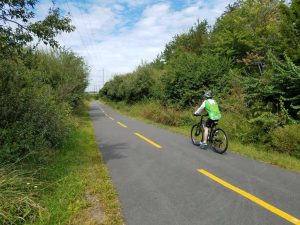 Rides on the Washington & Old Dominion Trail in recent days have been damaging for some bicyclists, as tacks spread on the path in the Herndon area have disabled bikes.

Bernard Kocis, service manager at Green Lizard Cycling in downtown Herndon, said he’s had to fix about 10 flat tires in the past two days because of the issue.

“That’s just people who have come in,” Kocis said. “How many people have fixed their own or called for a ride or whatever, I don’t know.”

The Reston Bike Club is warning its social media followers of the concern.

There has been a rash of tacks on the W&OD west of Herndon, causing many flats. W&OD Maintenance has gone out…

In a comment on Reston Bike Club’s Facebook page, Green Lizard owner Beth Meyer said a majority of the tacks were reported to be in the area of the trail between Ferndale Avenue and Crestview Drive in Herndon. A moderator for the Bike Club’s page said they have been noted as far out as the Pacific Avenue crossing in Sterling, which is just west of Route 28.

“All the tacks look the same,” Kocis said, adding that while he rode into work on that area of the path Monday, he didn’t suffer damage.

Karl Mohle, park manager for the W&OD Trail, said a crew was sent out Monday afternoon with a magnetic sweeper in the effort to capture as many of the tacks as possible.

“They went down the trail and swept it clear, [and] we’re going to check it out almost daily,” Mohle said. “I don’t know if this is just a one-time, kind of high-school thing, or what.”

Mohle said that in his 10 years on the job, this is the first time he has heard of such an incident on the trail, which runs 45 miles from Purcellville in Loudoun County to Shirlington in Arlington County. Kocis also said this is an abnormal occurrence that is causing undue heartache to riders.

“[The bikers] are not happy when they have to have a tack pulled out of their tire and have to pay for service to have it repaired,” he said. “It’s an irritant, and people are riding bikes to have fun.”