Restonians turned out in droves two weeks ago for a County-organized community meeting on its proposed Reston PRC zoning ordinance amendment. The essence of the proposed language change is to increase the cap on Reston’s population from 13 to 16 people per acre, but that ignores several other factors including station area development, affordable housing and “bonus” market rate housing for developers. The crowd was so large that Supervisor Hudgins was forced to cancel the meeting. Those hundreds of people were there because, contrary to what the County keeps telling the community, the proposed zoning change opens the door for an overall tripling of Reston’s population.

But that is only part of the story.

An important element of the zoning amendment proposal is the residential development it would not only allow, but is already planned, in our Village Centers. The Village Centers–North Point, Lake Anne, South Lakes, and Hunters Woods–are currently our neighborhood shopping centers and intended to be “neighborhood gathering places” in Bob Simon’s vision. They are where we buy our groceries, purchase our prescriptions, dine out in locally-owned restaurants, and meet many of our other family needs.

Here is what the Reston Master Plan has to say about the role of our Village Centers:

In short, our Village Centers are meant to be our hyper-local “gathering places” to live, work, and play with our families, friends, and neighbors. Nothing in the whole section of the Comprehensive Plan on Reston’s Village Centers suggests they should be anything other than neighborhood serving and, indeed, the plan suggests the opposite. 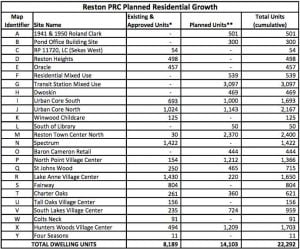 But that is not what the proposed Reston PRC zoning ordinance would allow and, indeed, what is already being planned according to the County’s data. The county’s table of proposed redevelopment sites, which provides the county’s justification for raising the population cap, projects huge increases in dwelling units and population that are totally out of character and will overwhelm North and South Reston.

Approval of the PRC zoning amendment to raise the population cap to accommodate such growth will allow developers to add nearly 13,000 residents to our Village Centers, including new affordable and bonus market rate housing that could be added under the county’s rules but is not included in the county’s table. In the worst case example, North Point Village Center, the PRC re-zoning proposal shows a potential twelve-fold increase in dwelling units (DUs), an increase of nearly 1,700 DUs and 3,600 residents. At the low end of the spectrum is Lake Anne Village Center whose redevelopment plan has already been approved with a near tripling of the number of residents to more than 2,600. Across Reston’s four Village Centers, population would be allowed to nearly quintuple. 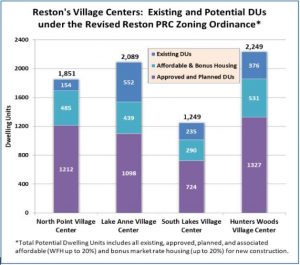 Another way to look at this planned increase in our Village Center population is through the County’s official PRC metric: dwelling units per acre (DU/A). Here’s the potential development if the PRC zoning ordinance is amended:

The potential increase in our Village Centers’ density under the proposed Reston PRC zoning amendment would destroy them as “neighborhood scale gathering places.” Instead they would become four more Reston Town Centers in a community that already has one. 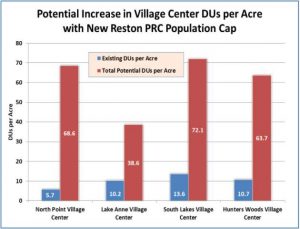 If redevelopment of our Village Center is not constrained to “neighborhood scale,” the implications of the proposed residential redevelopment are obvious, astounding, and consistent with all that we have said earlier. Streets will be clogged (even with County nods to transit, bikes, and walking), nearby elementary schools will be jammed, open space will increasingly be overcrowded since the County is doing little to assure its protection, the air we breathe will be more polluted, etc. And, of course, the County has made absolutely no commitment to the concurrent development of needed infrastructure and amenities, even those called for in its own policies. To the contrary, it appears to shirking its responsibilities to Restonians, disregarding its own infrastructure policies and standards, and ignoring the spending that goes with providing these improvements.

Our Village Centers are a cherished element of Bob Simon’s vision for our planned community, serving neighborhoods across Reston. If we let the county cram this Reston PRC zoning proposal down our throats and let the village centers be redeveloped at the county’s proposed levels, we will soon be overrun by development undercutting Simon’s vision in our Village Centers and elsewhere.

We need all Restonians to step up and tell the County, and Supervisor Hudgins’ in particular, that its Reston PRC zoning plans are totally unacceptable. Your best chance to do so will be at the community meeting held by Supervisor Hudgins at South Lakes High School cafeteria on Monday, Oct. 23, 2017, at 7 p.m.