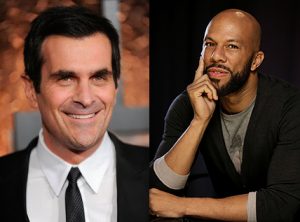 Some big names have been added to the list of celebrities who will participate in the Washington West Film Festival next weekend at Reston Town Center.

Rapper, actor and activist Common will headline the festival with an in-depth conversation that will also feature Academy Award-nominated cinematographer Bradford Young. The event will take place at 5 p.m. Sunday, Oct. 29, at Bowtie Cinemas (11940 Market St.), featuring showings of Young and Common’s short films “Letter to the Free” and “Black America Again” prior to the discussion.

Common is a two-time Grammy Award-winning performer and won a Golden Globe and Academy Award for his song “Glory” from the film “Selma,” in which he also co-starred and for which Young was cinematographer. In 2011, Common was controversially invited by President Barack Obama to perform at the White House during a poetry event.

Earlier this year, Young became the first African-American cinematographer to be nominated for an Oscar, for his work on the science-fiction film “Arrival.” In addition to that film and “Selma,” Young has also worked on films including “Pariah,” “Mother of George” and “Ain’t Them Bodies Saints.” He also worked on “Solo: A Star Wars Story,” scheduled for release in the spring.

Common and Young aren’t the only big names who have been added to the Washington West Film Festival’s lineup.

At 7 p.m. Saturday, Oct. 28, actor Ty Burrell will host a free advanced screening of an upcoming episode of long-running ABC sitcom “Modern Family,” on which he stars as father Phil Dunphy. After the showing, Burrell will participate in a 20-minute question-and-answer period with fans.

Burrell has won multiple Primetime Emmys, Screen Actors Guild Awards and more for his work on the critically acclaimed series. He has also been part of numerous other projects including the films “Black Hawk Down,” “Dawn of the Dead,” “National Treasure: Book of Secrets” and “The Skeleton Twins.”

Burrell is also scheduled to participate in the festival Sunday during the Kids In The Spotlight film program.

The Washington West Film Festival is scheduled for Oct. 25-30 in both Reston and Arlington. For more information about events scheduled as part of the festival, visit its website.