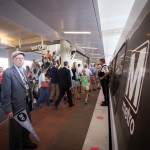 Metro’s general manager and CEO, Paul Wiedefeld released a proposed budget for fiscal year 2019–which would take effect July 1, 2018–that includes no new fare hikes for riders along with no service cuts, but asks local jurisdictions for an additional $165 million in funding over and above what they already contribute to the rail system.

Wiedefeld said that by showing an obvious commitment to safety and reliability, he believes the struggling rail system can win back riders, which would increase revenue through paid fares.

“This proposal builds on our success in investing capital to deliver projects that improve safety and reliability, which is critical to winning back riders,” Wiedefeld said in the press release. “This budget also doubles down on management cost controls to ensure we have squeezed the value out of every dollar that we spend delivering service to the region.”

Of the $3.1 billion budget, $1.279 billion is for capital improvements, which Wiedefeld explained would ensure full delivery of the remaining new 7000-series rail cars to replace older trains, along with new buses and paratransit vehicles, and repair and replacement of infrastructure such as rail power, radios, wireless systems and tracks.

Wiedefeld said the increase in jurisdictional funding–which is more than the previously promised 3-percent maximum–is the only way to avoid fare hikes and service cuts, which would negatively impact riders.

Furthermore, he said without that additional funding, planned service increases such as the extension of all Red Line routes to Shady Grove in Maryland, the planned Silver Line Phase 2 service–which begins in Reston and would extend through Dulles International Airport and into Ashburn in Loudoun County–as well as new Metrobuses, would not be funded.

“There is virtually nothing more we can do of significance to further trim costs without impacting service, which we don’t want to do,” said Wiedefeld. “So as a region we must act now on initiatives like those outlined in our funding plan, to control future operating cost growth.”