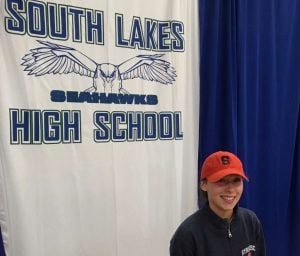 Olivia Beckner, a senior at South Lakes High School and state champion in the Liberty District, Region D and CA in cross country, signed with Syracuse University this week.

Beckner led the SLHS girls cross country team to its first district championship since 2001 earlier this year. She also helped the team finish third in the regional games and advance to the state championship.

Just last week, Beckner won the state title after finishing second last year. Beckner has also competed in SLHS indoor and outdoor track and field teams. There, she was named an 11-time All-State competition and was also named to the Washington Post All-Met team.

Beckner’s skill is well-documented in the record books of SLHS. In January, Beckner capped off the regular season with a school record in the mile at the Virginia Showcase Invitational indoor track and field meet in Lynchburg. She ran a 4:45.30 mile.