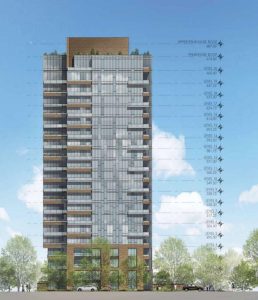 The Fairfax County Planning Commission deferred a decision on a proposal to bring a 20-story condominiums to 1801 Old Reston Ave. Wednesday night amid questions about the building, which includes up to 150 units and a parking garage.

Although the developer Renaissance Centro, and the county’s planning and zoning staff resolved major issues raised in a technical staff report, the parties continued to disagree over how the condominiums incorporate workforce housing.

Zoning staff said workforce units should be similar in size to market rate units, especially since the developer is already exceeding the floor area ratio outlined in the plan while pursuing an exception that could potentially allow the developer nearly 40,000 square feet in bonus density.

The commission also raised concerns about the amount of parking in the development. Residents of the condominium would pay for in-house parking, a structure that members said was problematic because residents of workforce housing may not be able to afford paid parking and may instead have to park on the curb on North Shore Drive.

The development would also remove overflow parking used by some residents of the neighboring Harrison Apartments.  Currently, some residents use the surface parking lot on the site, according to zoning staff.

The commission deferred its decision to January 25.

Andrew Painter of Walsh Colucci Lubeley & Walsh, the developer’s representative, however, said the county should recognize the unique financial challenges in building a high-rise development. He said the developer was committed to providing 24 workforce units that would have the same number of bedroom units as market rate units but smaller overall units.

Painter also said the developer, which also developed the Carlton House condominiums in Reston Town Center, is keen on pursuing the development as a “legacy project” that would be the “crown jewel” of the area. He noted the proposed project would, if approved, be the first for-sale condominiums to be constructed in Reston in more than 10 years with the hallmark feature of providing home ownership opportunities for workhouse housing.

“This is kind of the last piece of the puzzle,” Painter said.