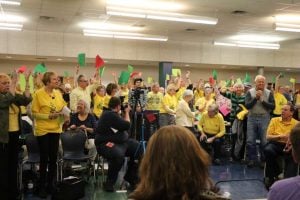 Opponents of a proposal before the county to increase Reston’s population density continue to mobilize ahead of community meeting on Monday night.

The Coalition for a Planned Reston, a community organization that includes Reclaim Reston, Reston 20/20 and the Reston Citizens Association, will gather community feedback about the proposal and discuss specific changes to scale back Reston’s master plan in an effort limit the scale of development in the planned community.

The proposal, which will go before the county’s Board of Supervisors, would increase the maximum allowed population per acre in the Planned Residential Community district from 13 persons up to 16.

The zoning change could also open up Reston’s village centers to increased residential development. The proposal would allow the Board of Supervisors to approve developments above 50 residential units per acre within the district’s Transit Station Areas (TSAs) — so long as the projects comply with the area’s master plan that guides development.

Reston Association staff opposed the changes. In a letter, In the letter, the RA staff also asks county supervisors to hold off on any further consideration of the PRC density cap increase until RA staff and county staff together can examine the Reston Master Plan portion of the county’s Comprehensive Plan.

Meanwhile, the coalition will pitch amendments to Hunter Mill District Supervisor Cathy Hudgins before Christmas. Overall, the coalition is seeking to constrain density growth and ensure infrastructure keeps up to pace with development.

CPR hopes to maintain the intensity of opposition to the proposal, which eclipsed in late October during a 900-person public community meeting in Reston where an overwhelming majority of attendees opposed the proposal.

“We are anxious to present what we believe are reasonable Reston plan amendments to Supervisor Hudgins rather than just denoting a list of topic areas where changes could be made,” said Terry Maynard, co-chair of the Reston 20/20 Committee. “We are hopeful that the community will buy in to these proposals and possibly suggest some modifications and additions.”

Changes under consideration include reinstating a population cap throughout Reston which existed in the community’s 1989 plan; placing a cap on high-density, high-rise residential development, which the coalition stated is unlimited in the current plan; and phasing development with supporting infrastructure similar to the Tysons plan.

On a broader level, the coalition seeks to ensure county policies and standards that govern schools, parks and transportation are realistically in line with Reston’s growth potential.

CPR will also use the meeting platform to discuss other controversial zoning matters, including the “densification of Saint Johns Woods” and the addition of a road through Hidden Creek Country Club.

“The last minute inclusion by the Planning Commission of developer language allowing Bozzuto to re-develop St. Johns Woods at triple its current density is a perfect example of community exclusion in the development process,” said Reclaim Reston member Bruce Ramo.

The meeting will be held on Monday at 7 p.m. in the Reston Association Conference Center.