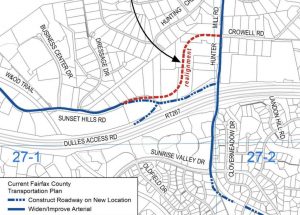 Relief could be on the way soon for drivers who frequent Hunter Mill Road near the Dulles Toll Road.

The plan also includes adding a roundabout as an intersection control. Hunter Mill Road would become a four-lane road between the intersection of Crowell Road and Sunset Hills Road to the Dulles Toll Road’s westbound ramps.

John Carter, the Hunter Mill District’s planning commissioner, compared the new plan to George Washington Parkway. Conceding the comparison was imperfect, he said the changes feature sweeping curves, major setbacks of 400 feet from houses to the road and a commitment to preserve a pond and a forested resource protection area.

The plan passed by the commission includes several amendments to address concerns raised by the Hunter Mill Defense League and the Hunting Crest Homeowners Association. Changes include:

The county’s Board of Supervisors will hear public comment on the plan on March 6 at around 4 p.m.

Since 2014, the county held several community meetings to lay out traffic management alternatives. The latest plan is a mix of several options, but departs from previously discussed plans, which the county indicated no longer work.

Carter said the county’s studies clearly indicate the current plan is the “better method to calm traffic in this area.”