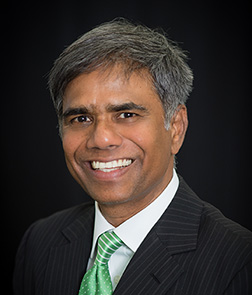 Voting in the 2018 Reston Association Board of Directors election will run from March 5 through April 2. This week, we will continue posting profiles on each of the candidates.

Featured here is Sridhar Ganesan, who is facing six other candidates for two at-large seats for a three-year term. The profiles are in a Q-and-A format. With the exception of minor formatting edits, profiles are published in unedited form. Each candidate had an opportunity to answer the same questions in their own words.

I have lived in Reston for over 19 years. After an international finance and business degree from Columbia University, I was working out of New Jersey for Bethesda-based Lockheed Martin, when I traveled to Reston in 1997 for a conference.  My wife and I found this small new town to be charming.  After numerous trips to Reston over a year, we relocated here in 1998.

What brought me here was work, but what made me choose Reston from all of the neighboring towns was a combination of things:

The small town feel, lakes, open space, walkability, very little density, proximity to an airport and, believe it or not, I liked Reston for TRAFFIC.  Yes, even with fewer lanes on Reston Parkway and a very incomplete Fairfax County Parkway that did not run all along Reston, traffic flow was just fine then.

Reston seemed like a great place to drop down roots, chase my version of the American dream and raise a family. I am exactly where I want to be.

Seven years ago, I decided to leverage my varied and global experience for public service in civic issues and Education. I served on the Fairfax County Public Schools (FCPS) budget taskforce in 2015 that identified potential cuts of up to $100 million to deal with expected funding shortfalls.

In 2012, I joined the Reston Citizens Association (RCA) board and served as its President from 2014 to 2017.  During that time, we opposed higher Planned Residential Community (PRC) density; the opening up of Reston National Golf Course for development; Town Center paid parking; and any re-development that would force low-income seniors out of Lake Anne Fellowship House.

Given its central role, we also focused on Reston Association (RA) and its serious missteps on the acquisition and renovation of the Tetra/Lakehouse property.  These experiences led me to the conclusion that the best place to reform RA was from within.

I now serve as Treasurer of Reston Association (RA) and am an At-Large Director.  With strong support from the current RA Board, I led the establishment of many operational reforms at RA, since my appointment in June 2017.   I want to finish what I started at RA, so I am running for a new 3-year At-Large Term to reinforce the reforms to make RA work better for its members.

Density:  The issue of greatest importance to Reston is the County proposed increase in density from 13 to 16 persons per acre in Reston’s PRC district.  Combined with the growth in the Transit Station Areas (TSA), an increase in the PRC population from the zoned limit of about 74,000 to 100,000 seriously threatens the future of Reston we know today. Property developers recently expressed concerns about softness in the Reston market, so where is the demand and why the rush? Reston’s current transportation and other infrastructure cannot support such growth.  The public response has been a loud “NO” to higher density. RA’s role should be collaborative with its members and other community organizations to shape Reston’s destiny.

RA Operations, Processes, Controls:  A second major issue is completion of the restructuring of RA operations started by the current Board majority and assuring that these changes become ingrained in RA. There were some serious problems that the Tetra/Lake House property acquisition, renovation and planning showed.  They include:

What should RA be? Third concern is to work with sports groups, members, clusters and other groups to do some soul-searching on RA’s strategic vision.  Many RA assets are aging.  Replacing/updating them will cost more than the Reserve Study estimates.  Bumper sticker slogans such as “Wasteful Spending” are easy, but even hard work can only yield so much cost reduction without crippling services and RA operations, so that is not the answer to everything.  RA cannot be all things to all people, so it is time for an honest discussion about what RA should be and what it should deliver to its members.

I want to continue the reforms instituted by the current Board and continue the positive change. I am leading the establishment and implementation of internal controls, oversight of policies and procedures to avoid a Tetra/Lake House repeat. I want to achieve the following for more effective functioning of RA for the benefit of members:

I bring 20+ years of operational, financial and executive leadership experience, including as Chief Financial Officer of a publicly traded company that I steered to a NASDAQ initial public offering.

My experience spans media, satellites, telecommunications, technology and education in the US and international markets.

I am an entrepreneur who has started-up several new ventures around the world and an executive who has helped restructure companies and businesses. My nature is to roll up my sleeves, dive into details, fix issues and get things done.

I have dedicated several hundred hours to digging into RA and it’s restructuring during my eight months as a very hands-on Treasurer and Director. I have demonstrated the vision, skillsets and passion necessary for public service. Some of the accomplishments are:

I believe that my background, commitment to public service, time and effort I have put into RA and the results achieved will help me as a board member over the next years.