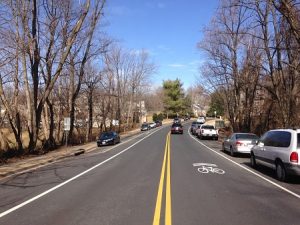 Prepare for a sea of orange cones. With spring quickly approaching, Virginia Department of Transportation officials are gearing up for re-stripping, road redesigns, and new bike lanes on multiple Reston roads this year.

Roadwork will take place from April through November. The Virginia Department of Transportation is holding a public meeting on plans on Monday, March 19 at 7 p.m. in Terraset Elementary School‘s cafeteria.

In response to residents’ concerns about safety along the South Lakes Drive corridor, the county plans to redesign a strip between Reston Parkway and Sunrise Valley Drive by converting an outside travel lane to a buffered bike lane — a move the county hopes will address concerns about limited sight distance for vehicles turning onto Sunrise Valley Drive and pedestrian traffic.

Bike lanes on South Lakes Drive between Reston Parkway and Sanibel Drive would be extended. The county will keep one travel lane in each direction due to the limited projected impacts of future development on traffic in that area.

A complete breakdown of plans in the Hunter Mill District is below:

In addition to attending the meeting, residents can submit online feedback. A complete list of impacted is online.