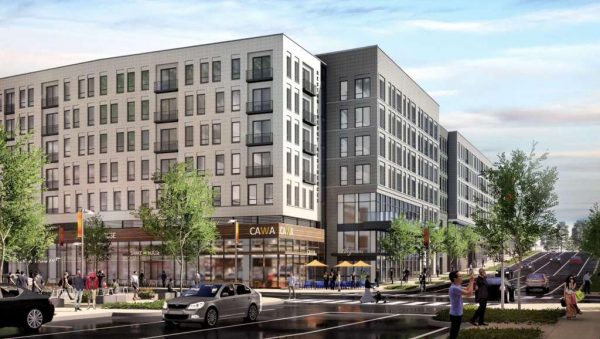 A decision on Brookfield Properties’ four million-square-foot redevelopment of the Reston Crescent site was deferred last week amid a disagreement regarding the developer’s contribution for the affordable housing fund.

The first new building, which fronts Reston Parkway, includes a Wegmans with 380 apartment built on top of it. The project is located west of Reston Parkway, north of Sunrise Valley Drive, east of Edmund Halley Drive and south of the Dulles Toll Road.

At June 28 Fairfax County Planning Commission meeting, county staff indicated the developer needs to pitch in more toward the affordable housing fund. Brookfield plans to ensure 15 percent of all units are affordable at income tiers of up to 70, 90 and 100 percent of the Area Median Income — a lower income distribution than county requirements.

An earlier clash over the developer’s commitment to providing an athletic field was resolved in recent discussions. According to the developer’s representative, Mark Looney of Cooley, Brookfield has an underdeveloped property under contract for a future full-size athletic field. Once the property is purchased, Cooley said the developer should dedicate it to the county’s park authority.

In remarks before the Planning Commission, John Carter, the commissioner for the Hunter Mill District, said the commission needed more time to discuss what could be a “precedent-making” decision. The commission will vote on the project on July 12.