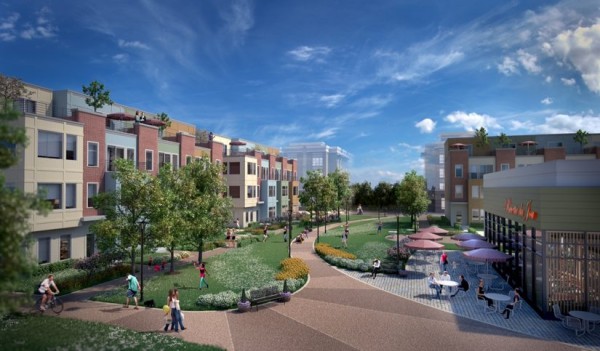 The Fairfax County Board of Supervisors approved the owner’s plan to redevelop the retail center into a mixed-use project with 156 residential units, community space, 8,500 square feet of retail and 6,000 square feet of office space. Jefferson Apartment Group purchased Tall Oaks Village Center in December 2014 for $14 million. A mix of townhouses, two-over-two townhouses, and multifamily buildings are approved for the 7.5-acre site.

Site development is expected to begin in March next year. Home construction will likely begin in October next year and be completed by the end of 2021.

In an Aug. 21 proposal submitted to the county, Stanley Martin, the contract purchaser of the property, says the county’s requirements for the size of garages, which are included in original entitlements, are too generous and create a “design challenge that is inconsistent with the planned site layout.” The county requires personal garages to have a minimum width of 11.5 feet for single-car garages and 20 feet for two-car garages.

“There was an error in the original entitlements that created a requirement that the garages have an interior dimension that could not be achieved with the size of homes that were planned for the community.  The county has standards regarding the size of parking spaces and the revised proffer language is consistent with those standards as well as the commitments that have been made on more recent projects of this type.”

Instead, the developer wants to remove the size requirement and add a commitment advising future purchasers of units to review the unit’s garage space. Covenants would also restrict the use of garages for parking, storing trash and other uses. Stanley Martin says it has received approval for garages as narrow as 10 feet in width at the Dulles Technology Center site. If the county approves the change, the development would “finally come to fruition,” wrote Mark Looney, the applicant’s representative, in a statement.

The Planning Commission will review the requested amendment on Nov. 15, followed by a public hearing before the Fairfax County Board of Supervisors on Dec. 4.

In 2007, Giant Foods, the center’s longtime anchor, closed, slowly pushing the center to slip into suburban malaise. The center’s location on a dead end and with a lack of visibility from a main street has also long remained a challenge.