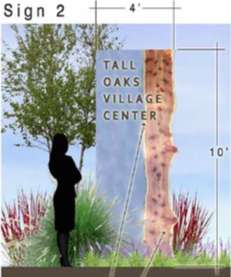 The commercial design of the property was also approved, with an alteration requiring faux windows in the retail tower be made of a reflective surface. In the design presented to the DRB last week, the faux windows had been proposed to consist of recessed EIFS.

The lone affected party to speak during the meeting was Mary Elyn McNichols, co-owner of Tall Oaks Assisted Living. While giving her overall approval to the plan, McNichols requested that some amount of exterior seating around the development’s stores be made handicapped-accessible.

In the landscape plan, the developers were asked by the DRB to find more locations to plant trees where possible.

One place were developers said they have already increased plants and trees is between the development’s 2-over-2 townhouses and the assisted-living facility, which was done at the facility’s request to create more of a buffer. The exercise station plans for the development were also designed after discussion with the assisted-living facility, developers said.

In addition to the development’s landscape plan, the garage doors and lighting were tabled for a future meeting, along with sliding doors and windows.

Located on a dead-end of North Shore Drive off Wiehle Avenue, Tall Oaks Village Center struggled for many years before the redevelopment proposal arose. Its longtime anchor tenant, Giant Foods, closed in 2007 and further vacancies followed quickly afterward. The 70,000-square foot center was 86 percent empty by the time the redevelopment was approved.

END_OF_DOCUMENT_TOKEN_TO_BE_REPLACED

More Stories
Legal Insider: Be Wary of Non-Compete Agreements for Independent ContractorsDuvall, Clive Davis To Be Part of Washington West Film Festival on Friday in Reston