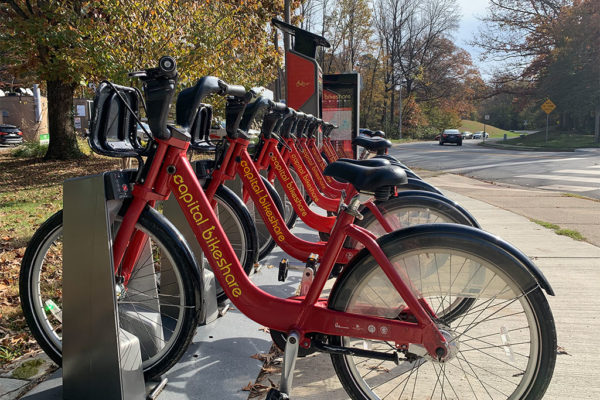 A little over two years after Capital Bikeshare launched in Fairfax County, the program is planning to expand across Reston. But details on where the new stations, which were proposed last year, are pending.

According to Nicole Wynands, Bicycle Program Manager for the Fairfax County Department of Transportation, the bike-share expansion is planned for late 2019 or early 2020.

“We are still working on the exact locations,” said Wynands, “but additional stations are planned to be added in both North and South Reston.”

A list of sites in Reston had been proposed last year, but Wynands said further study found some of the sites did not meet federal criteria for grant funding.

“The previously proposed stations [were] a concept proposal which [is] always subject to final engineering,” said Wynands. “We have since conducted surveys and developed preliminary design concepts. As the expansion is funded through a federal grant, each location has to meet a long list of criteria stipulated by federal requirements, state requirements and operator requirements. The surveys revealed that some of the originally proposed stations did not meet all siting criteria, so alternative sites are being considered.”

Additionally, Wynands said sites are being reconsidered based on proximity to new bike trails built through Reston over the last year.

“We will be able to announce the new station locations after we have received all needed permits,” said Wynands. “We are still planning on adding up to 11 new stations in Reston”

At its busiest, typically during June, Wynands said there were 1,861 trips starting or ending in Reston. Capital Bikeshare also recently implemented a pilot project to add new battery-operated bikes to Reston. The program will continue through the end of the month.

Wynands said the most popular stations in Reston are the ones at the Wiehle-Reston East Metro station, followed by the Reston Town Center Transit Station and the Sunset Hill Road/Isaac Newton Square Station.

“The system is designed primarily to cover the first and last mile between the origin/destination and transit,” said Wynands. “This is evident in the popularity of the bike share station at Wiehle Metro, which serves both as an origin and a destination for commuters in the morning and afternoon, as people working near Reston Town Center are arriving by Metro and continuing their trip to Reston Town Center via the W&OD, while at the same time Reston Town Center residents commute via the W&OD to the Metro station to continue their trip to Tysons, Arlington or DC.”

According to Wynands, the system is continuing to grow in ridership, with a seven percent year-over-over growth recorded thus far.

“It takes a few years for a new system to establish itself, and we expect additional growth through the expansions as we will serve additional riders and destinations.”