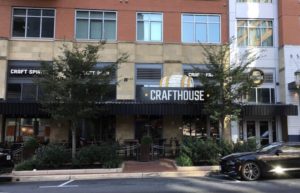 This letter was submitted by Spencer Abraham. It does not reflect the opinions of Reston Now. We publish article and opinion contributions of specific interest to the Reston community. Contributions may be edited for length or content.

As a resident of McLean whose family owns a retail store in Reston, I was extremely excited to read the Nov. 21 article in Reston Now entitled “Crafthouse Donates Part of Bottled Beer Sales to California Wildfire Aid.”

The article indicated that Reston’s Crafthouse brewery was donating 10 percent of all bottled beer sales through Dec. 15 to aid in the cleanup of the areas that were destroyed by the recent wildfires in California.

Although my home is in Northern Virginia, I attend college at Claremont McKenna College in Claremont, Calif. Fortunately, the area around my campus was not affected by the recent destruction, but we were close enough to smell the smoke from the fires and to understand, up close, just what damage had taken place.

A number of my friends from school live or have family members who live in the communities where the fires struck, and I know from them just how deadly they were and the incredible expense that will be incurred as the affected areas clean up after the infernos.

Therefore, it made me especially happy to read about the commitment made by Crafthouse and proud that businesses from my home area — a full continent from where the fires raged — were willing to help out. I salute Crafthouse and thank owner Evan Matz for his decision to help and the customers whose purchases and donations are providing the funds sent to California. Many thanks all around.