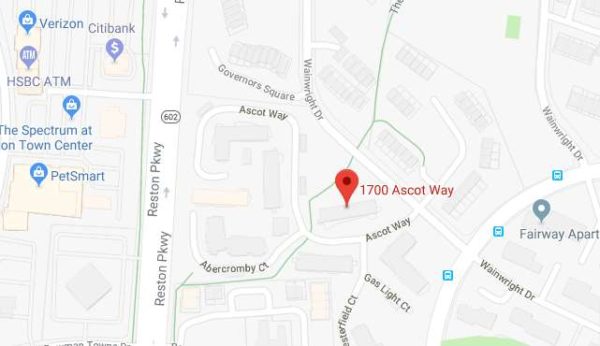 Updated at 4:35 p.m. on Jan. 2 — A person was taken to the hospital for non-life-threatening injuries.

Firefighters responded to an apartment fire on Christmas Day (Dec. 25).

Fairfax County Fire and Rescue units were at the scene at 7:03 p.m. of a fire in a bedroom closet of an apartment in the 1700 block of Ascot Way. An electrical event with the light fixture in the closet started the fire.

Smoke was spotted in the front of the two-story, condominium building. One person in the apartment self-evacuated after the smoke alarm went off and was transported to an area hospital with minor, non-life-threatening injuries, according to the fire department.

On Tuesday, December 25 at approximately 6:40 p.m., units were dispatched for a reported fire in a condominium in the 1700 block of Ascot Way in the Reston section of Fairfax County.

Units arrived on scene with smoke showing from the front of a two-story, condominium building. Crews quickly extinguished a fire in a bedroom of one of the units. There were no reports of firefighter injuries. One occupant was treated and transported to an area hospital with minor, non-life-threatening injuries.

There was one occupant home at the time of the fire. The fire was discovered by the occupant after a smoke alarm sounded. The occupant was able to self-evacuate and call 9-1-1.

Fire Investigators determined that the fire was accidental in nature and started in a bedroom closet. The cause of this fire was an electrical event involving the light fixture in the closet.

No one was displaced because of the fire. Red Cross assistance was offered but was declined. Damages as a result of the fire were approximately $18,750.

Units on scene of garden apartment fire in the 1700 Ascot Way in Reston with smoke showing from front. Report of fire in closet. #fcfrd #news #fairfaxcounty pic.twitter.com/1whjhEzdJ9