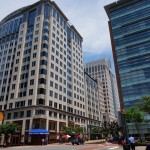 15. The closure of Obi Sushi in Reston Town Center over the weekend brought in 7,081 pageviews. An employee said that ever since Boston Properties, RTC’s owner, implemented paid parking, the restaurant has seen its number of customers dwindle.

14. Speaking of another business shuttering its doors in RTC, the upcoming closure of Williams-Sonoma in January was a popular post with 7,232 pageviews. A specific date for the closure has not been announced yet.

13. Residents’ concerns that upgrades to the plaza in the South Lakes Village Center will attract teens and noise collected 7,281 pageviews. Residents near the center and merchants said they worry that the new space will become a magnet for youth from Langston Hughes Middle School and South Lakes High School and also increase noise.

12. A 37-second video of a former Reston Association employee yelling “Why are you such a b**** Afghanistan?” and other profanities at a driver garnered attention with 7,288 pageviews. The man, who was described as a seasonal RA employee, posted the video on Facebook.

11. The arrest of an assistant principal at Hunters Woods Elementary School for shoplifting at the Target in Reston brought in 7,332 pageviews. Melissa Tochterman, 47, of Herndon, was arrested and charged with grand larceny in January and was then placed on leave from the school.

END_OF_DOCUMENT_TOKEN_TO_BE_REPLACED

More Stories
UPDATED: Fire Breaks Out in Reston Apartment on ChristmasPet of the Week: Twinkle