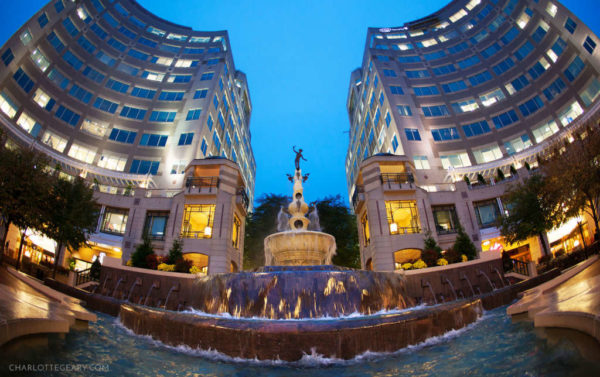 Updated at 5:30 p.m. — Clarifies the project as part of a series of guides and includes Phoebe Avery.

Locals may find Reston Town Center to be a difficult place to park a car or open a business, but it’s apparently a popular spot to view public art.

Charlotte Geary, a local photographer, worked on commission by Public Art Reston to photograph every public art piece for an upcoming guide.

“Finding the artwork was half the fun,” Geary said on her website. “It was like a scavenger hunt around town. Of course I knew the most prominent sculptures, like Mercury Fountain, but some of the other artwork was unfamiliar to me and thrilling to discover.”

Geary provided a glimpse behind the photographs on her blog, like her use of a fisheye lens to capture the curve of the buildings.

The second guide of the series is slated for a release sometime in 2019, Anne Delaney, the executive director of Public Art Reston, told Reston. “The purpose of the series is to create greater awareness about Reston’s public art collection — the community’s cultural assets — available to all at all time and free of charge,” she said in an email.

While some of the artwork is prominent, others are more obscure, like troll sculptures hidden under a bridge and half-concealed in undergrowth.