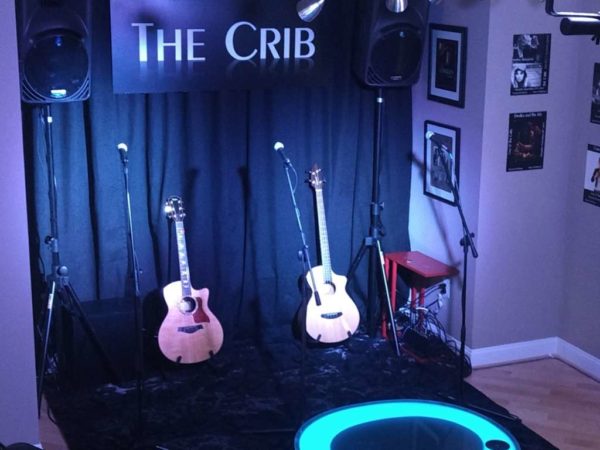 A Herndon house concert series that features independent artists is set to challenge a zoning violation at the Board of Zoning Appeals next week.

Chris Devine, the host of The Crib, received a violation notice taped to his front door from the Town of Herndon for a concert on Nov. 17 in his home, the Herndon Connection reported last week.

Dated Dec. 13, the citation says that 44 people were observed entering the home between 6:30 p.m. and 8:30 p.m. for a Gina Venier and Lexie Hayden concert.

“[This] activity constitutes an Indoor Entertainment use and is not a permitted use on the subject property pursuant to the Town of Herndon Zoning Ordination,” the citation said. It gave Devine 15 days to resolve the violation to avoid incurring fines.

Instead, Devine decided to appeal the violation.

“We firmly believe The Crib house concert does not meet that definition, and further believe the citation arose from a lack of understanding of the house concert concept,” The Crib’s blog says.

At the public comment period during the Town Council public session last night (Jan. 15), Devine said that he met with town staff after receiving the citation.

“In that meeting, I learned that the town had very little understanding of that activity, which is house concerts, and as a result were very vague on how my activity tripped the wire as a commercial use,” he said.

Devine slammed Town of Herndon’s leadership, saying that he was denied access to basic information about the situation after he tried to ask follow-up questions after the meeting.

A Herndon town attorney told Mayor Lisa Merkel that the appeal never goes to the Town Council. Instead, it goes to the Board of Zoning Appeals and then to the circuit court.

“There is a role in the Town Council in looking at our code if there were a change to be made in the future,” Merkel said.

As Devine tackles the appeals process, a GoFundMe page created on Dec. 20 is helping to cover the fines.

The campaign says the following:

It will take a while to work through the appeals process — possibly as long as three months — and we don’t know at this point what the outcome will be.

During this time we have five fantastic artists already scheduled to perform and we will incur fines for each event we choose to hold, but we want to continue with the events in order to keep our commitments to both the artists and our guests who have made advance donations.

During normal times, each house show we hold costs The Crib between $100-$200; we do this because we have a passion for connecting incredible artists with deserving and appreciative guests.

But we can’t absorb the fines on top of the costs we already incur as part of our mission to the arts and the community.

Our fundraising goal will allow us to pay the fines over the next several months ($200 for the first event and $500 per subsequent event). We are also seeking a small amount to cover any legal fees we may incur during the appeals process.

Any residual funds will be used to create an even better experience for artists and audiences and/or donated to our non-profit partner, The Warrior Music Foundation.

Since launching in 2015, The Crib has hosted nearly 50 house shows with 28 different artists, according to its website.

Each show lets the artist perform two 45-minute sets of original music. Seating is on a first-come basis with a capacity of roughly 40 people. Attendees are encouraged to make a donation in advance — all of the donations go to the artist.

A public hearing notice indicates that the Board of Zoning Appeals will take up the matter next Thursday (Jan. 24) at 7:30 p.m. at 765 Lynn Street.