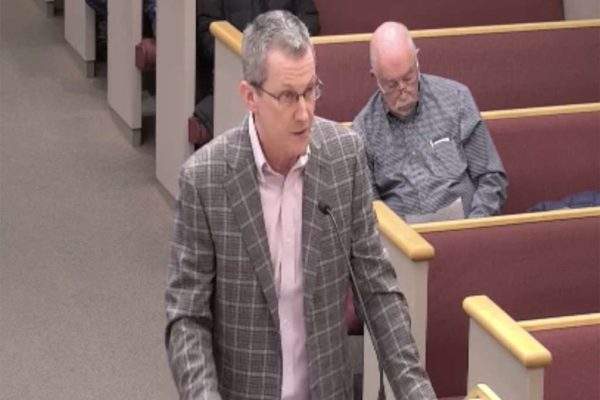 Herndon’s Board of Zoning Appeals narrowly threw out a zoning violation for a local house concert series at its meeting on Thursday (Jan. 24).

Chris Devine, the host of The Crib, said he decided to challenge that citation on Dec. 20 after meeting with staff three days earlier. Devine told the Board of Zoning Appeals that the staff appeared unfamiliar with house concerts, which he likened to a sports fan who has fellow fans over to watch the show and asks for money to help cover food and drink costs.

After two more complaints on Dec. 8 and Dec. 10 mentioning a lack of visitor parking, a notice of violation was issued on Dec. 14.

“[This] activity constitutes an Indoor Entertainment use and is not a permitted use on the subject property pursuant to the Town of Herndon Zoning Ordination,” the citation said.

Stromberg said that the zoning ordinance doesn’t really define a “commercial use” versus “non-commercial use” for indoor entertainment, adding that he did not consider who was receiving the money from the tickets.

All of the attendees’ donations and tickets go to the artist, according to The Crib’s website.

Devine said at the meeting that he’s taken steps to remediate any confusion that could result from a cursory review of the house concerts.

He said that he changed the wording on the website from “ticket” to “suggested donation” to clear up any concern about where the money goes. He also removed reference to a limited liability corporation he had set up for potential professional endeavors unrelated to the house concerts.

“I am certainly free as a homeowner to invite into my home anyone that I choose, including those fellow music lovers who want to support those artists through a donation,” Devine said in response to a definition of commercial activities referring to open attendance. “While I have not had the occasion, I can also refuse to anyone at any time for any reason, therefore attendance to my home is not open to the public.”

Since launching in 2015, The Crib has hosted nearly 50 house shows with 28 different independent artists, according to its website. Each show lets the artist perform two 45-minute sets of original music. Seating is on a first-come basis with a capacity of roughly 40 people.

After several locals testified in support of The Crib, the board voted 3-2 to overturn the violation.

The Crib’s next scheduled performance is set for Feb. 8 and will feature Dustin Furlow and Matt Thomas.

Image via Board of Zoning Appeals