The meeting conflict between Fairfax County’s Strategic Plan meeting and the scheduled decision on a contentious zoning ordinance has been resolved.

The public meeting on Fairfax County’s Strategic Plan was recently rescheduled to March. It was originally scheduled for Thursday (Feb. 13) — the same date as the county’s Planning Commission meeting, which will include a vote on a proposed zoning ordinance that would increase the population density in parts of Reston.

Now, the meeting in Reston — one of four community engagement events on the county’s strategic planning process — will take place from 7-8:30 p.m. on Monday, March 4.

The free meeting will be organized into moderated conversation groups of residents from nearby communities, and locals will have opportunities to share their thoughts and experiences “that will be used to help shape a countywide strategic plan,” the event description says. The meeting is set to take place at the Reston Community Center (2310 Colts Neck Road).

The strategic planning process has six phases outlined on the county’s website.

The first phase started in November to develop a project approach and community engagement plan started and was completed in January. The second phase — community engagement — is set to run through March to seek input and come up with a draft of priorities around seven to 10 areas.

Then, the strategic planning process will shift to defining those priorities in March and April before returning for community input from April to July. The Strategic Plan will then get developed from the summer until the end of the year before seeking adoption from the county’s Board of Supervisors at the start of 2020. 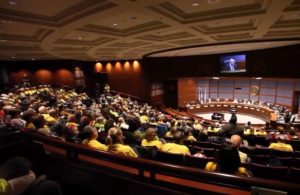 Meanwhile, the Planning Commission is set to finally weigh in on the contentious population density proposal this Thursday, after delaying a vote following a five-hour-long public hearing on Jan. 23.

The proposed amendment to the zoning ordinance would increase the maximum allowed population per acre in the Planned Residential Community (PRC) district — Reston’s primary zoning district — from 13 persons to any number up to 15, along with allowing residential development at a density of up to 70 dwelling units per acre in certain areas.