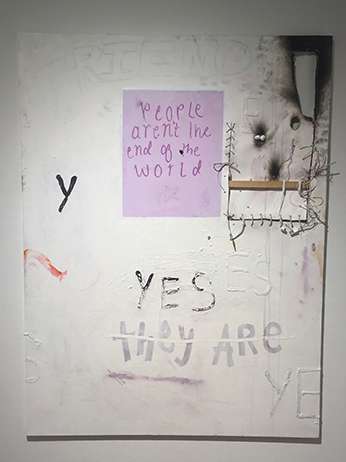 (Updated at 5:05 p.m. on March 4) Starting Saturday (March 2), a student art exhibition will be on display at the Greater Reston Arts Center (GRACE).

GRACE reworked the program to include grades K-12, inviting elementary and middle schools to participate for the first time, according to a press release from the arts center.

“We are now able to take the best parts of our existing programs, expand those in close conversation with FCPS and make a greater impact on more young artists,” Executive Director and Curator Lily Siegel said in the press release.

The exhibit is based on Caitlin Teal Price’ exhibit last year titled “Green is the Secret Color To Make Gold.”

GRACE worked with art educators at the schools to develop content and concepts to include into the curriculum, according to the press release. After educators, students and their families had the chance to view the exhibition and meet the curator and artist, students were able to respond to the theme by creating their own artwork.

FCPS released additional information about the students and their art on March 4:

One student, who is non-verbal, experiences art and, primarily painting, as a ritual or routine, according to this teacher. He makes repetitive marks with varying color and layers them to refer to different subject matter, such as a landscape. Another student has made at least one artwork a day for multiple years on topics from space-like environments to designs that involve flags of the world. South Lakes students shared their artist statements, explaining the process for creating their works.

[Another] student described the artwork as expressive of the mental illness she has been diagnosed with and says her work shows “that I’m locked inside myself and can’t get out of the emotions in my head.” She uses symbols indicative of psychological and emotional states. A team of two students uses found objects to which they apply paint, glue, and other materials, embracing their sense of humor and love of experimentation to provoke a sense of play and curiosity in their audience.

A third student uses her art to define herself through her own values and beliefs, not through the culture of her home country. She uses layering as a metaphor for memory and experience relevant to her life today. One student used a found piece of wood to which she responded with color and brush strokes ranging from tumultuous to more gentle; another uses her responses to daily events, observations, and feelings to create her paintings. One student submitted a photography display using a camera from a bin of broken cameras, kept by his teacher for spare parts, and fabricated a pinhole lens for the camera. Using a 30-second exposure, he took a series of photos that didn’t meet his expectations but he came to like for their abstract quality and colorful texture that “had a kind of painterly approach.”

Several free events are based around the exhibit.

The opening reception for the exhibit is set for tomorrow from 5-7 p.m. GRACE plans to host an open mic for kids on March 16.

The exhibition will be on display until March 30 at the gallery located at the Reston Town Center (12001 Market Street #103).