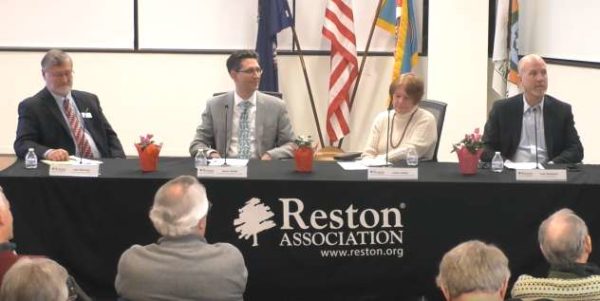 Four of the five candidates for the five open seats on the Reston Association’s Board of Directors responded to 15 questions at a candidates’ forum Wednesday night (Feb. 27).

The questions came from a handful asked by the Elections Committee and 10 from audience members. The candidates are:

Four main themes kept popping up — Reston’s density cap, resource management and programming, the board’s structure and responsibilities and community outreach. Here’s what the candidates had to say about each of those topics.

Anton emphasized that it is important to get information from RA members about which resources they use and don’t use and what they would like to see offered.

“Our facilities have been here for a long time, and we do a reserve study but I think it’s important to get input from our members and integrate into the budgeting process,” she said.

Webb echoed Anton, saying that data should drive resource management decisions. “I think there’s a large percentage of Reston that is happy with what we’ve got,” Webb said.

Mooney and Mulkerin said that a reserve study will help guide the RA’s asset management.

As for cutting back on nonessential programming, Webb and Mooney stressed that the financial viability of the association should shape the scope of programming, while Mulkerin and Anton stressed that programs not generating revenue shouldn’t be eliminated right away without trying to find alternative funding solutions

Mooney stressed that the RA should be ready “to divest ourselves of things that do not have value, but do a careful longterm look at it.”

Recently, the board started rethinking the power structure of RA’s key staff. A resolution before the board addresses specifically RA’s legal counsel, chief financial officer, director of finance, controller, chief operating officer and the authority of the board’s chief executive officer. Currently, RA’s bylaws say that the chief executive officer controls personnel and compensation schedules, along with hiring and firing responsibilities.

Webb and Mulkerin said they did not have knowledge about the current relationship between the CEO, CFO and board to comment.

Mooney said that because the CEO comes up with and implements the annual budget, the CFO is his “chief ally,” adding that defining the authority will help make sure that the board does not reach beyond its legal limits. Mooney said that the CEO should have daily direction of the CFO, while the CFO should have “ready recourse to the board and vice versa.”

“I do feel it is the CEO who does the hiring the firing of the CEO,” Anton said

An audience question about how the RA relates to the small tax district stumped the candidates.

A controversial zoning ordinance proposal for Reston recently has been the subject of many debates recently for Restonians.

The zoning ordinance would increase the maximum allowed population per acre in the Planned Residential Community (PRC) district — Reston’s primary zoning district — from 13 persons to any number up to 15, along with allowing residential development at a density of up to 70 dwelling units per acre in certain areas.

A question from the Elections Committee asked the candidates if they have evaluated the proposal, and, if so, what their conclusions are.

Webb admitted that he wants to learn more about the proposal, adding that he hasn’t seen “real numbers or even a real vision.”

“I think we want to keep Reston intentionally different from everything else that is going on,” Webb said. “It will take a lot of creativity to get everything to balance correctly.”

Meanwhile, Mulkerin said that he has been studying the proposal for the last three weeks and came to the conclusion that Fairfax County does not have infrastructure plans in place to support the increase.

Mooney said he supported the Fairfax County Planning Commission’s recommendation that the county’s Board of Supervisors reject the proposal and recouple the Reston Master Plan with the PRC zoning ordinance in tandem. “PRC depends on coordination between planning and zoning,” Mooney said.

Anton said that development will happen no matter what, yet the county needs accurate numbers to justify the increase.

In response to an audience question, everyone said they would vote “no” on raising the PRC cap, except Webb, who said he would “pass” on saying how he would vote.

One question from the audience asked the candidates how they would stimulate more communication between the Reston Association and its members.

Anton said that she would reach out more to the clusters. “I keep hearing that the clusters don’t feel like they are being heard,” she said, adding that more of a social media presence could help.

Webb added that people serving on the boards of the various clusters are already motivated and could help the RA rouse engagement among residents. He also echoed Anton’s social media idea.

“[RA President] Andy Sigle looks good on YouTube,” Webb said. “We need to keep up the digital presence and be more humanistic.”

Mooney said he wants to see more conversations with the clusters about their design guidelines to avoid covenants issues. He also stressed that the importance of reaching out to newcomers to “help them understand, appreciate and buy into the idea of a covenanted community.”

Adding to the previous comments on communicating with clusters, Mulkerin sad the RA should take a grassroots approach coupled with social media “to push thier buttons.”

Pedestrian accessibility and walkability issues with a proposal to redevelop Isaac Newton Square were officially cleared by the Fairfax County Planning Commission. At a meeting on Oct. 20, planning commissioners…

An illustration of a coronavirus (via CDC/Unsplash) Fairfax County’s COVID-19 case levels haven’t entirely come down from the late-summer Delta variant surge, but they appear to be headed in that…

Monday, Oct. 25 “The Blackest Battle” (7:30 p.m.) — A production at the CenterStage blurs the lines between cinema and live performance, showing a story of racial violence in a…

(Updated at 12:55 p.m.) A nonprofit helping people with disabilities is moving closer toward maintaining, renovating and upgrading a farmhouse built in 1891 at Frying Pan Farm Park. The organization,…