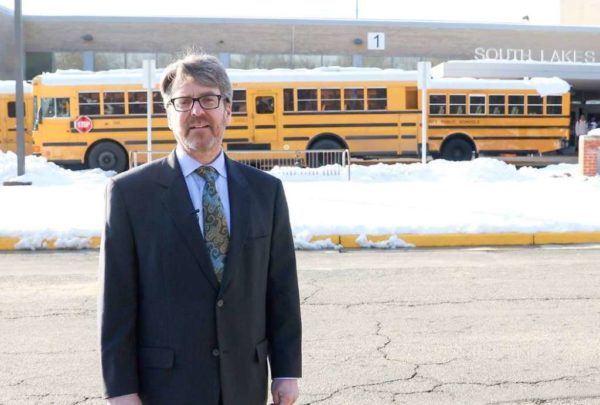 Andy Sigle, the outgoing president of the Reston Association’s Board of Directors, is running for the Hunter Mill District seat on the Fairfax County School Board.

Sigle announced his decision to run on Feb. 19 on Facebook about a month after Hunter Mill District Representative Pat Hynes said that she won’t seek re-election.

In his announcement, he wrote:

My wife, Kim, and I have put four children through the FCPS school system, the last one graduating in 2017. I am a strong advocate of student equity and access in our public schools, support of our teachers, establishment of infrastructure that keeps up with development within our community, as well as a driver for family and community engagement and sustainability initiatives. I bring to the role more than twenty five years as a manager and executive in the telecommunications industry along with a MBA from the University of Chicago. I have a proven track record of tackling difficult situations and creating positive results through a focus on asking sensible questions, holding reasonable discussions, collaboration and collegiality. Again, I know I can make a difference on our school board and I ask for your support.

Since then, Sigle has highlighted his work as the former president of the South Lakes High School PTSA board, which included organizing a series of diversity and inclusion workshops, helping to establish the school’s food pantry and moderating a discussion between Hynes and Hunter Mill District Supervisor Cathy Hudgins meant to educate the community.

Sigle’s bio says that he has turned his attention to community work after 28 years in the telecommunications industry.

Earlier this month, Sigle nabbed a new role as the chief operating officer and vice president of external relations for Leadership Fairfax, a nonprofit that aims to inspire private and public sector individuals to tackle community issues.

Laura Ramirez Drain and Melanie Meren are also running for the school board seat.

The committee also plans to hold an endorsement meeting on May 8 at Lake Anne ES.