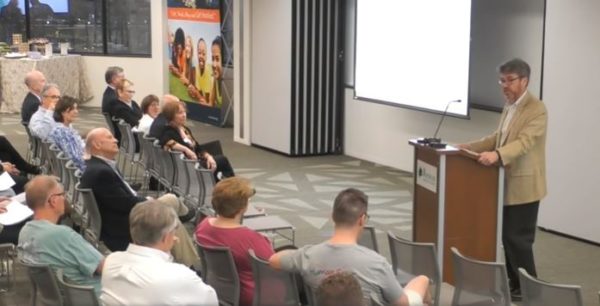 After several months of fighting the county on a controversial zoning proposal, outgoing Board of Directors President Andy Sigle said he expects the Reston Association will keep tackling development and density issues in the future.

“A hot topic for Reston over the last several years and one that will continue into our future is development,” Sigle said, adding that the RA board and staff worked with community organizations to “protect the ‘planned’ part of our Planned Residential Community (PRC) designation.”

In March, the Fairfax County Board of Supervisors unanimously voted to “indefinitely defer” the consideration of the proposed zoning amendment that would have increased the maximum allowed population per acre in the PRC district — Reston’s primary zoning district.

“The board and RA staff will continue to monitor this as density issues resurface in the future,” Sigle said.

Looking back at accomplishments over the past year, Sigle highlighted the following:

Last night’s meeting was the 50th anniversary of Reston Association’s first Annual Members’ Meeting. The meeting serves to update RA members on the state of the association, unveil the election results for the Board of Directors and receive member comments.

Election Committee Chair Ed Abbott announced the election results for the Board of Directors. “This year we saw a 14 percent turnout for Reston generally and even higher turnout in some districts,” Abbott said.

Here are the results: