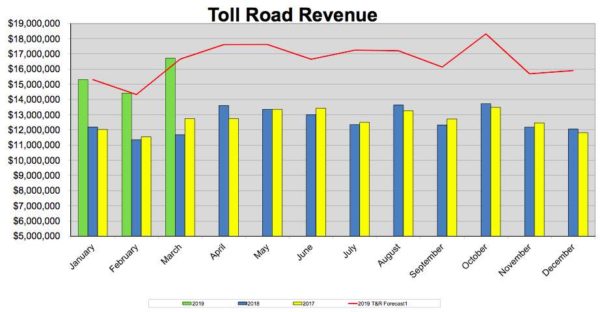 Despite a toll increase that went into effect in January, more drivers are using the Dulles Toll Road than the Metropolitan Washington Airports Authority anticipated.

Between January and March, tolls brought in $46.4 million — 31 percent more compared to the same period last year. That gives the MWAA $11.2 million to work with in order to fund phase two of the Silver Line.

Even though the number of toll transactions dipped by 4.8 percent compared to the previous year, transactions were 1.3 percent higher than MWAA expected. So far this year, there have been 21.7 million transactions.

The cost of operations also increased this year. Year-to-date expenses were $1.3 million or 17 percent higher than the same period last year. MWAA attributed this increase to $1 million in operating expenses for expanded service and $300,000 in transaction fees.

Toll prices increased for the first time in four years from $2.50 to $3.25 and from $1 to $1.50 at ramps in order to cover phase two of the Silver Line past Reston Town Center to Dulles International Airport and Ashburn. Another increase is expected in 2023.