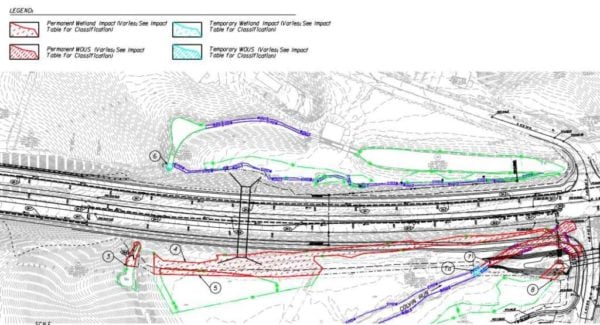 The U.S. Army Corps of Engineers is considering a proposal to widen a three-mile stretch on Route 7 from four to six lanes.

The project, which runs from Reston Avenue to Colvin Run Road, would require the removal of just under one acre of wetlands and 2,196 linear feet of streams — the equivalent of a little over seven football fields. Shirley Contracting Company, the applicant, is attempting to minimize the environmental impacts of the project by shifting the proposed realignment by several feet. This shift would save nearly three acres of wetlands and preserve 109 linear feet of streams, according to the U.S. Army Corps of Engineers.

Still, Shirley Contracting Company will have to provide roughly 1.9 acres of wetland credits and 2,101 feet of stream credits to offset the impact of the project on the environment. Credits are a way to create compensatory mitigation to ensure ecological losses to streams and wetlands do not result in a net loss of natural resources.

Intersection improvements, the replacement of the bridge over Difficult Run, shared-use paths, utility relocations and stormwater management are also planned. Roughly 1,600 linear feet of Colvin Run, which runs parallel to Route 7, will also be relocated.

The public comment period ends on May 24. Written comments can be sent to [email protected] or by mail to Norfolk District, Corps of Engineers (ATTN: CENAO-WR-R), 803 Front Street, Norfolk, Virginia 23510-1011).