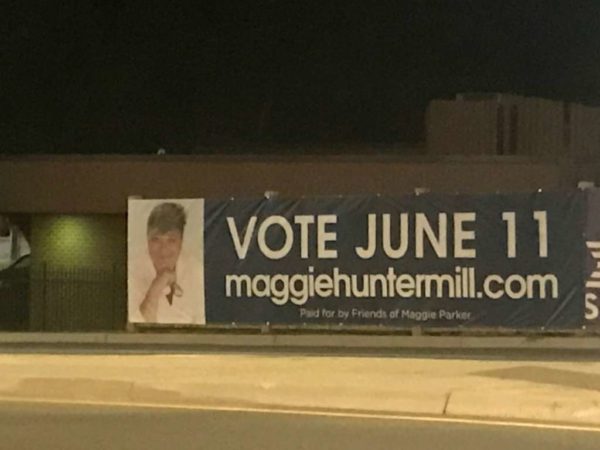 (Updated at 5:45 a.m. on May 31 to state candidates did not receiving ad pricing information from Comstock).

Comstock Companies, the developer of Reston Station, will allow political campaigning and electioneering at Reston Station Plaza following a recent debate over the legality of the company’s longstanding policy to bar soliciting on its properties.

In a letter to Reston Now’s editor regarding the May 24 article, Chris Clemente, the company’s CEO, clarified Comstock’s position on the issue. His company’s vice president of communications, Maggie Parker, is running for Hunter Mill District Supervisor, and her campaign signs are plastered on the property.

A spokesperson for Fairfax County has stated that campaigning at the property is allowed by state election law, noting that Comstock leases Reston Station Plaza from Fairfax County under a 99-year ground lease.

Clemente said the company has barred all types of soliciting “out of respect for the thousands of daily visitors’ time.” He also noted that the county has not raised any issues with Comstock’s policy.

A county spokesperson did not immediately respond to a request from Reston Now about why this was the case.

Parker pushed Clemente to give other candidates running for the seat the opportunity to erect signs at Reston Station, Clemente said. Requests to have signs were submitted by Walter Alcorn‘s campaign on May 25 and Laurie Dodd on May 28. Parker also requested permission to use Comstock’s property for an all-candidate meet and greet event, which Clemente said Comstock fully supports.

Clemente, a former Reston resident and parent of current Reston residents, is backing Parker for the seat. In a 19-point letter to Reston Now, Clemente expressed his support for Parker, who he called a “champion of affordable housing” and a “strong proponent of limiting significant development in the Hunter Mill District.”

In a statement, Clemente wrote the following:

This is why I support Maggie Parker in this important race, because she has the skills needed to create solutions to complex issues that can sometimes be divisive, build consensus, and put the interests of the Hunter Mill District residents first, rather than hurling misleading accusations for political purposes. It’s refreshing to see a political candidate take the high road!

Parker said that she organized the forum because she wants to have all five candidates campaign in a safe and open environment and meet some candidates’ interest in coming to the plaza.

“A free-flowing meet and greet is one way to accomplish both,” Parker said. “I am confident that my message and experience will win out.”

Her campaign manager pitched the meet and greet idea to other candidates running for the seat on May 28. A date has not been set.

Alcorn, whose volunteers were recently barred from distributing campaign materials at the plaza, says the gesture comes too late:

Comstock responded to our community pressure with a token gesture that is too little, too late as Comstock’s candidate has enjoyed weeks of unlimited and exclusive advertising. Democracy does not happen in 3 hour windows. Comstock is attempting to buy a seat on the Board of Supervisors for developers. Voters should also be alarmed that Comstock is using a public private partnership with the County to limit freedom of speech for all candidates but their own.

Both Dodd and Alcorn stated that they have not yet heard back from Comstock regarding requests for the pricing of advertising on the plaza.

The Hunter Mill District primary is set for June 11.