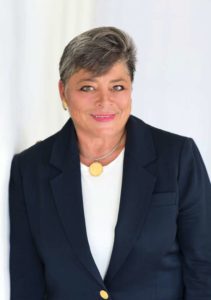 Maggie Parker, an executive with Comstock Companies who played a role in helping to bring the Silver Line to Reston, is joining the increasingly crowded Democratic field for Hunter Mill Supervisor.

Parker, who last month was honored with a Cornerstones of Our Community Best of Reston award, has lived in Fairfax County since 1986. She says she’s running on a sense of civic duty and a “passion for responsible, collaborative dialogue.”

As a vice president for Comstock, the Reston-based real estate developer, she handles areas including communications, government relations and community relations.

“She has been helping Comstock integrate its new neighborhoods, Reston Station and Loudoun Sta­tion, into our regional community since 2010,” according to a press release. “She has spent her time listening to and engaging with regional authorities, jurisdictions and citizens to find thoughtful connections and integration.”

She stands out from the current field of contenders for Cathy Hudgins’ Hunter Mill District Supervisor seat by being a real estate developer in a field that has expressed varying degrees of opposition to or concern about continuing development in Reston and Vienna.

“Maggie believes in quality development in appropriate places and diligence in providing timely and multi-modal transportation solutions,” the press release said. “She strives to protect an environment that is sustain­able, and that allows all in our community to live, work and prosper.”

She also “supports sustainable growth in the right places, economic development, continued pursuit of transportation solutions — all things that work in concert to improve equity opportunities for our community.”

Four other Democrats have entered the race for her seat on the county’s Board of Supervisors, including: