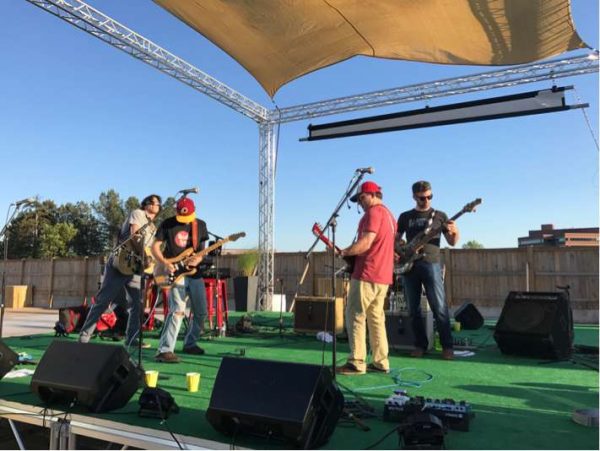 Reston’s outdoor venues will come to life this summer as Reston Community Center puts on six entertainment series over the next several weeks.

“Everyone likes to get outside in the fresh air during the summer months,” said RCC Executive Director Leila Gordon. “RCC is taking our ‘show on the road’ with these series and bringing people together right where they are. We want families and friends to enjoy the spirit of Reston all summer long.”

In addition to traditional staples like Thursday dance nights at Lake Anne Plaza and performances at Town Square Park in Reston Town Center on Saturday mornings, RCC has added two new entertainment series to its line up.

In “Lunchtime with the Arts at Mason,” student performers from George Mason University’s College of Visual and Performing Arts offer free lunchtime concerts on select Thursdays until October 24 at Reston Town Center’s Town Square Park from 12:30-1:30 p.m. Performances range from show tunes to euphonium ensembles. The series kicked off  on May 9.

Reston Station will be home to the “Summerbration Fun Brunch” series, which brings entertainment and activities to Reston Station Plaza starting tomorrow (June 1). Attendees will get the chance to enjoy music and engaging activities on Saturdays and Sunday through August 25. The program takes place from 11 a.m. to 1 p.m.

Parking is free on weekends in the Metro garage.

“Summerbration” concerts, which take place on Fridays from 7-9 p.m. at Reston Station, will continue this year. The concert schedule includes familiar groups like Scott Kurt & Memphis 59 and the band Oasis Island Sounds. Several concerts will also include professional dance instruction. Three hours of validated parking is available in the ParkX garage. The series ends on August 23. RCC presents this series in cooperation with MSE Productions, Inc. and Reston Station, the event’s host.

A Family Fun Entertainment Series in Reston Town Center’s Town Square Park also continues on Saturdays from 10-10:45 a.m. This series is geared toward kids and begins on June 15. The series is presented by RCC in cooperation with MSE Productions, Inc. and is hosted by Reston Town Center Association. Garage parking is free on Saturdays.

On Sundays, Sunday Art in the Park with the Shenandoah Conservatory continues at Town Square Park. The first performance is set for Sunday (June 2) from 7-8 p.m. This series is presented by RCC and Reston Town Center Association in cooperation with Shenandoah University.

All series are free and open to the public.