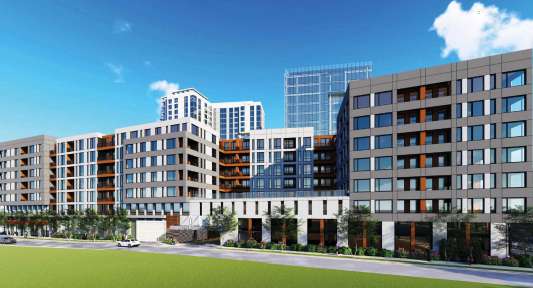 Within the last five years, more than 500 residential units have been proposed at the door of the future Herndon Metro Station, which is on track to open by the end of 2020 In all three place-making projects that were recently approved by town officials, there are no affordable or workforce housing units.

Comstock’s downtown Herndon redevelopment project — which has 273 apartments — and Penzance’s mixed-use development less than one-tenth of a mile from the future station — which has 455 residential units — will not have any ADU or WDU units. Stanley Martin’s Metro Square project — which has 64 two-over-two condos — also has none. Prices for those units start at $679,990.

Newly elected town council members Cesar del Aguila and Pradip Dhakal are currently mulling ways to create more new affordable and workforce housing. They plan to discuss policy instruments with the county’s Board of Supervisors, the town’s legal staff, and other town and county officials to decide next steps.

“If we do not interfere now and talk to builders, it will be very difficult to manage later. This is the time for the change,” Dhakal said. “We need to work with the county and work independently as a town to see what we can do.”

It’s unclear if the town has enough workforce housing to meet the demands of people who work within or near the town’s borders. The number of residential units in Herndon is expected to increase by 30 percent over the next 25 years, according to county data. Major growth is anticipated in Herndon’s transit station areas.

Unlike Fairfax County, the Town of Herndon does not the statutory authority to mandate the inclusion of workforce or affordable housing units. But now, as the Silver Line trains approach, some local elected officials are pushing for the town to explore ways to include workforce units in new developments at a critical juncture in the town’s history.

Policy options could include seeking state-enabling legislation to create an ADU and WDU program for the town — likely modeled after the county’s program.

Others are looking to dip more into the county’s penny fund — which includes tax dollars from town of Herndon residents and has historically been used to preserve and promote affordable.

But some caution that a WDU and ADU program managed by the town could be too cost-inhibitive.

Melissa Jonas, chairwoman of the Town of Herndon’s Planning Commission, said seeking such a change would likely require a town charter amendment, state-enabling legislation, the creation of a housing office, and other administrative requirements that could result in a “net zero” win for the town.

“It’s not easy and it’s not cheap,” Jonas said.

In the past, the town has leveraged its relationship with the county — which has the administrative and financial resources to maintain and preserve older affordable housings units — to ensure inclusion and housing affordability are a priority in the town. Town officials have also made an effort to educate the town’s planning commissioners about housing affordability issues as new applications cross their desk.

The town’s comparative advantage lies in finding other ways to ensure projects are affordable — including working with places of worship to pursue creative new projects on unused land, increased transparency about development approval timelines, and decreased the cost of doing business in the town.

The county currently provides most of the funding for the town’s housing rehabilitation specialist, who finds ways to preserve and rehabilitate current affordable and workforce housing units. The county also provides administrative support for housing vouchers and other federal programs.

Projects like the units set aside for lower-income households at Herndon Harbor House II are a good start to ensure housing affordable is a central part of community planning. That retirement community was partly financed by the Low Income Housing Tax Credit program.

Dhakal says that’s not enough and Del Aguila says that a town-led ADU or WDU program is “the right thing to do.”

“This initiative will provide several benefits: positively impact the future of many people [and] families by providing an option for home ownership in Northern Virginia,  improve the quality of life for people in our town… and create opportunities for financial security for more residents,”  he said.

Not everyone on the council is convinced of the need to enable the town to regulate affordable housing, including town councilmember Signe Friedrichs.

“I moved to Herndon partly because it was affordable, and I hope it can stay that way while also improving its housing stock. But I also hope we can maintain, improve and possibly expand our workforce and affordable housing without also increasing our budget, the cost of which would cause people to move out of town,” Friedrichs said.