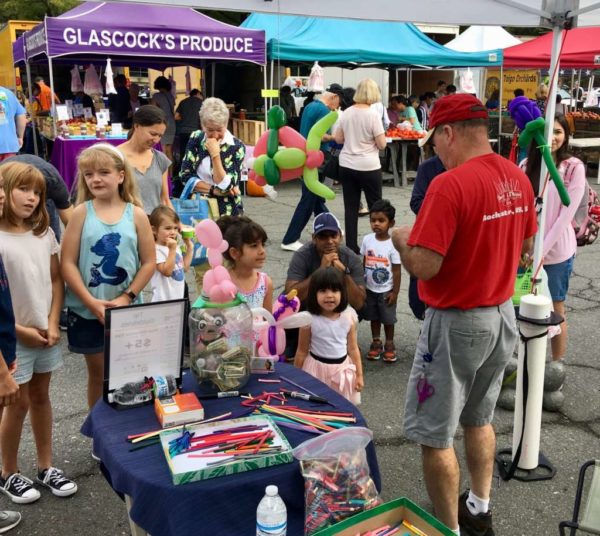 The trio behind Reston Farmers Market was awarded for more than 20 years of community work. The managers received the Elly Doyle Park Service Award from the Fairfax County Park Authority.

From a program that gives dollars for low-income families to an initiative to reduce plastic waste, the managers have put on the market on Saturday mornings from April through December.

John Lovaas has managed the market for 22 years. His wife Fran Lovaas joined him after her retirement 16 years ago and Keith Strange joined the initiative a decade later.

Northern Virginia magazine featured their efforts in a recent article:

“Community service is probably the number one thing that sets them apart for this award,” says Mary Olien, site operations manager of the Fairfax County Park Authority. “They know the farmers and vendors very well, so they can promote the products in an honest way. They are highly respected, which makes for a very fun and organized market.”

The market managers have worked with local nonprofit Cornerstones since 2012 to enable low-income families to use their SNAP benefits, formerly known as food stamps, to purchase fresh fruits and vegetables at the Reston Farmers Market. Plus, after all the shoppers have cleared out, vendors gather all of the untouched produce together and bring it to local shelters, decreasing food waste.

The managers partnered with Clean Fairfax to decrease plastic use by encouraging the use of reusable mesh bags. So far, five vendors have joined the sustainability initiative thus far.

FCPA established the Elly Doyle Park Service Award in 1988 to recognize the service of former ParkAuthority Board Chairman and member Ellamae Doyle. The award publicly recognizes a volunteer or group of volunteers for outstanding contributions to county parks.

END_OF_DOCUMENT_TOKEN_TO_BE_REPLACED

More Stories
Poll: What are Your Thoughts on Reston Town Center’s Rebranding Efforts?Superhero Splash and Dash Set for August 18