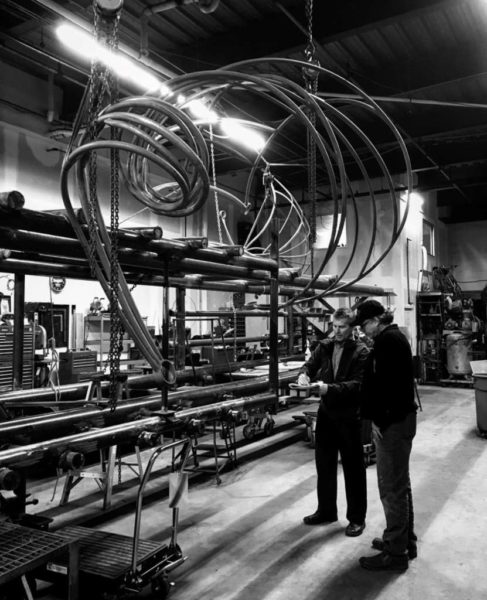 A new 50-foot steel sculpture by artist Sue Wrbican is on track for installation in the fall.

For more than a year, the Greater Reston Arts Center has been working on the project, which is inspired by American surrealist Kay Sage. Construction began a little over a year ago. The sculpture is intended to encourage viewers to think about the themes of urbanism and landscape, environmentalism and natural resources, feminism, and community, said Lily Siegel, GRACE’s executive director and curator.

“Through her project, Wrbican is not just bringing attention to Sage’s life and work, she is making it relevant to our contemporary lives by introducing forms inspired by Sage into our present urban landscape,” Siegel said, adding that Sage’s work was overlooked during her time and that she lived in the shadow of her celebrated artist-husband and associates.

Siegel hopes the sculpture will be a gathering point and topic of conversation.

GRACE turned to crowdfunding to help finance the construction of the project, as well as ongoing programming scheduled for the sculpture. While the organization did not release the cost of the project, Seigel said the project has received “incredible support.”

A talk about the project, which will be installed in Town Square Park, is set for August 22 from 12:30-1:30 p.m. at GRACE. The event is free and open to the public.