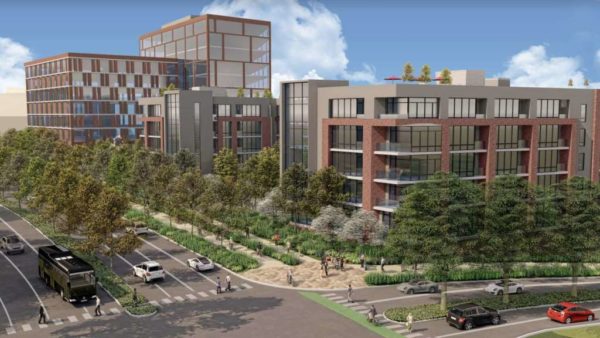 A major mixed-use development near the Wiehle-Reston East Metro Station is barrelling its way towards the county’s approval.

The proposal — which is the last major block of developable land near the Metro station that is in the books — has attracted community concerns for its scale, impacts on traffic, compatibility with adjacent neighborhoods, and pedestrian connectivity.

In response to feedback from the commission at a previous meeting and community criticism, TF Cornerstone removed roughly 86,550 square feet from an office building fronting Sunrise Valley Drive, reducing the massing of the building from 12 to seven stories. The developer shuffled most of the removed square footage to the residential towers, which sit deeper within the site. The setback along the curb of Sunrise Valley Drive was also increased to a minimum of 50 feet.

Preliminarily, TF Cornerstones is proposing to add an at-grade crosswalk at Wiehle Avenue near the off-ramps to the Dulles Toll Road — a component of the plan that residents warned poses safety concerns for pedestrians.

The developer also agreed to embark on an up-to-three-year study to explore options with the county and the Virginia Department of Transportation for a tunnel or a pedestrian bridge.

“This is the first applicant to take this on,” said Hunter Mill District Planning Commission John Carter.

Carter said the developer did a good job of amending its plans in response to feedback from the county and residents.

The plan heads to the Fairfax County Board of Supervisors for a vote on Tuesday (Oct. 15).