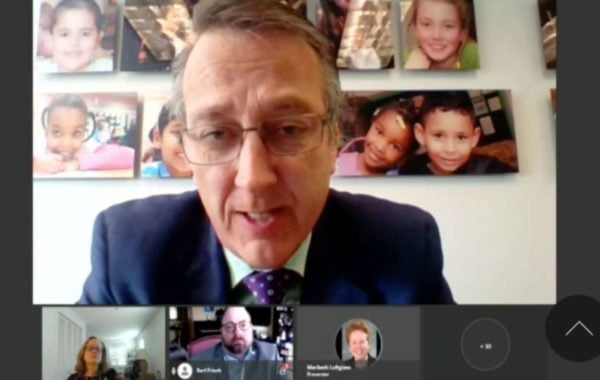 Fairfax County school board members expressed major dismay over the botched rollout of the school system’s first week of distance learning, including security issues and technical problems with Blackboard’s system.

At an online meeting today (Thursday), school officials acknowledged the school’s leadership failed to ensure adequate security measures were in place when students and teachers logged on to online sessions.

Teacher-led distance learning was canceled this week due to technical issues the school system is working to resolve.

FCPS Superintendent Scott Brabrand told the school board today that the issues have been two-fold: capacity and load issues on Blackboard’s end and failures to implement and monitor security protocol by FCPS.

“We failed to properly train the staff,” Presidio said, adding that the school’s leadership did not communicate how teachers should properly set up online sessions and make sure security settings were in place.

“We absolutely share the concern and the dismay at some of the behavior that was reported,” Tim Tomlinson, Blackboard’s chief product officer, said. “It’s unconscionable.”

School board member Megan McLaughlin said she was “shocked” the 10th largest school system in the country did not conduct load testing prior to the launch of the system.

“There is no getting around it,” McLaughlin said.

In addition to security challenges, the system experience log-in issues on the first day of learning, following by problems associated with Blackboard’s servers. The Reston-based company is working on upgrades to the system to resolve ongoing issues.

Tomlinson said that Blackboard “had no indication that these problems would occur” and shared a statement from the company apologizing for the disruption.

“We are working with FCPS to require students to log in to the FCPS 24-7 site and authenticate their identity before they are permitted to join a virtual classroom,” according to the Blackboard statement.

Tomlinson also noted that FCPS chose not to update its software for three years to the latest system. Seven updates were publicly available but not applied, he said.

But Maribeth Luftglass, assistant superintendent of the school system’s department of information technology, noted that the school system was never told those upgrades were required for performance purposes, especially prior to the launch of distance learning. She also added that the system was due for a planned upgrade this June.

Prior to the COVID-19 pandemic hit locally, the school system had plans in place to replace Blackboard Learn, a virtual learning environment, with Schoology, another distance learning tool operated by PowerSchool Unified Classroom, over the next two years.

The school system hopes to pilot the system in the fall.

School board members also questioned why distance learning proceeded if there was indication there were technical problems prior the launch. Several of the members urged FCPS to consider learning alternatives, like resources from Google.

“If Blackboard can’t handle this, lets try Google” Laura Jane Cohen, who represents the Springfield District. “Everyone has worked too hard to make this happen.”

According to the presentation, less than half of the teachers have Google Classroom sites, which could be used as a learning supplement.

“There would be significant teacher training required and additional workload on teachers to create these sites,” the presentation said. “Additionally, Google Classroom is not linked to the student information system and teachers would have to manually create courses.”

The presentation notes that students and teachers have equal permissions on Google Meet, which could let students override teacher content, and that guest access is allowed.

Other school board members said a two-hour delay in instructor-led learning on Wednesday was not communicated effectively to the school community.

Brabrand apologized for not making the “right call” when he called for the two-hour delay.

“We could have communicated it better,” Brabrand said, adding that his mistake “caused undue confusion for our teachers and our principals.”

Blackboard is currently working on software patches this week to address the capacity issues behind the login difficulties, Luftglass said.

On April 14, Blackboard Learn and Blackboard Collaborate Ultra, a real-time video conferencing tool, were linked with a new feature that will only allow students enrolled in a class to join the class session and ban guest access, school officials said. Additionally, a back-up plan is being developed using Collaborate Ultra, they said.

FCPS aims to resume its synchronous learning on April 20.

More Stories
Poll: Are You Working from Home Today?Reston Comprehensive Plan Task Force to Convene in May