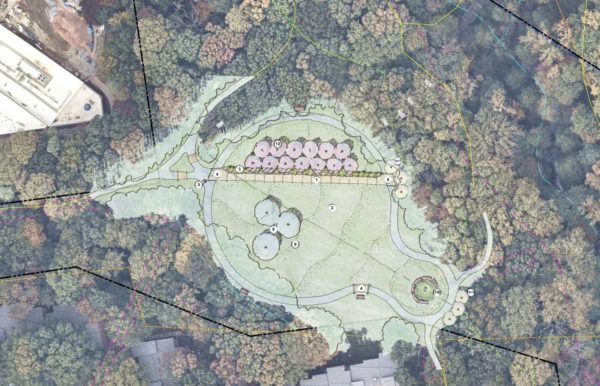 Plans to reactivate the Hunters Woods Ballfield — which is behind Reston Community Center — are moving forward after Reston Association’s Board of Directors approved a conceptual plan at a meeting last night (Thursday).

RA is working with community stakeholders, including the Hunters Woods Neighborhood Coalition, to reactive the site, which is no longer used by Reston-Herndon Little League due to its long distance from the nearest parking lot.

The conceptual plan, developed with the help of architecture firm Kimley-Horn, would repurpose the area into common open space with a pathway, entrance to the field, additional trees and landscaping. More features would be installed during later phases, including:

The board authorized funds last year to repurpose the ballfield. Plan to install additional pathway lighting in the area — which were originally presented alongside the repurposing proposal — is expected to come before an RA committee next month.

With the board’s approval secured, the plan will be presented to Fairfax County planners and RA’s Design Review Board.

A cost estimate for the project was not immediately available, but surveying, engineering and permitting could cost around $25,00, Butler said. Grading will require a minor site plan.

RA Board President Julie Bitzer described the proposal as a “passive park.”