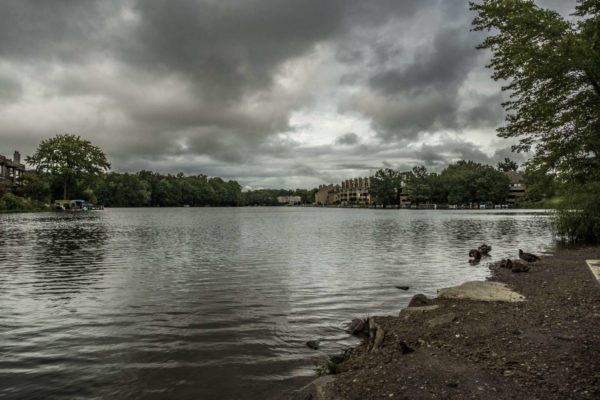 Thanks to cooling weather, rain and less sunshine the algae bloom which has covered Lake Thoreau for weeks is now on the decline and the lake is mostly clear, according to Mike Leone, Reston Association’s spokesman.

In mid-August, algae started to cover parts of Lake Thoreau causing the RA to tell nearby residents to avoid contact with the lake as the algae is “potentially harmful.”

RA staff pointed to the hot summer sun as a contributing factor and the RA’s recent attempt to clear the lake of an invasive plant species as potential reasons for the recent algae bloom. Now that the weather has cooled and some recent rainfall has poured freshwater in the lake, the algae bloom is subsiding Leone said.

“Essentially, the situation on Lake Thoreau is not necessarily as bad as it was like three or four weeks ago when we were in the height of the summer,” Leone said.

Management of the algae is something that RA staff is tracking closely with experts frequently examining the lake. Now that the lake is mostly clear, a treatment option to remove the algae may not be necessary anymore, Leone said.

“If the lake is very clear, it is likely that treatment is not necessary,” said William Peterson, the watershed manager for RA in a statement. “However, you also do not want to treat during a large algae bloom because killing the algae could decrease the dissolved oxygen in the lake, potentially leading to a fish kill.”

The direct cause of the bloom has not been determined, but the association’s attempt to clear the lakes of hydrilla, an invasive plant species, could be a factor. Removing hydrilla from the lake left more nutrients available for algae, potentially causing the latest algae bloom.

Before RA tried treating the lake with herbicide to kill the hydrilla, RA stocked the lake with grass carp, a freshwater fish that eats the plant. But the fish were not enough to clear the lake of hydrilla, leading to other treatment options.

Lab results from the lake confirm the algae specie that covered the lake was Dolichospermum planctonicum, also known Anabaena, which could cause  skin irritation or make someone nauseous if exposed to it.

Algae grows when it is exposed to sunlight and nutrients, which often flows into lakes as runoff. While algae is a normal part of the aquatic ecosystem, some types of algae can make people sick if they are exposed to it causing the most recent concern over the algae bloom at Lake Thoreau, which has had previous algae blooms, particularly during summer months.

More Stories
Poll: How is the School Year Going So Far?Report Finds Hundreds of Cracks at Silver Line Stations