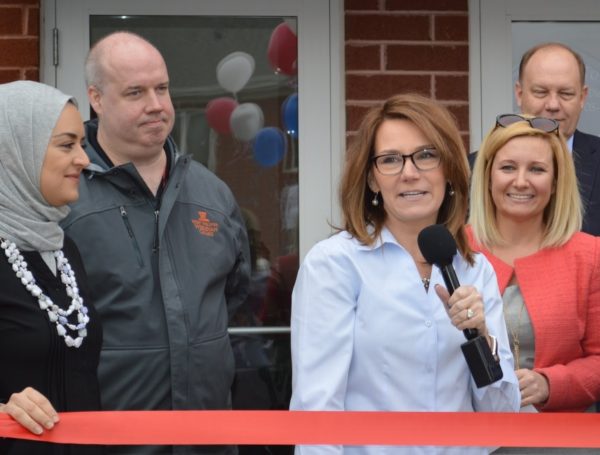 Herndon will welcome a new mayor-elect on Tuesday to follow Lisa Merkel’s eight years as the town’s mayor.

Merkel announced in January that she would not run for a fifth term as the town’s mayor. She will spend the next few months with her husband and two kids while she decides on her next steps, though she says she has “no intention” of running for higher office right now.

“Several people have pitched some ideas my way, and I’d like to still volunteer,” Merkel told Reston Now in a recent interview.

“We’ll be doing college visits hopefully with my son. And I’m going to take at least a few months to just sort of settle in and figure out what’s next. But I’m not going anywhere. I live in downtown Herndon. I still love it just as much as the day we moved here.”

On Nov. 3, a successor will be elected to the role Merkel has maintained since she won a three-way race for mayor in 2012 by just 38 votes.

Sheila Olem, Herndon’s current vice mayor, and Roland Taylor are running to be the town’s next mayor. Merkel is not endorsing a candidate for the election cycle, but she did have some words of wisdom for the candidate that will take the reins as mayor.

“When I came into the office, I was a mom and a teacher. I was not a land use expert or lawyer or never studied political science,” Merkel said.

“I truly was a citizen that managed to get herself elected mayor. So there was a lot I did not know, and I think it’s important that when you don’t know something, find an expert and listen and don’t be afraid to ask questions.”

She also advised the next mayor to focus on the jurisdiction that they can control in the town and not to focus on national policy issues. She specifically advises a focus on public works, land use, and building planning while helping cultivate the community.

Merkel says focusing on the town helped her move into policies and successfully secure a town council seat in 2010. That same year, she was elected vice major. It is also what continued her motivation when she was voted in as the town’s first elected female mayor in 2012 and the subsequent three elections after.

During her time as mayor, Merkel helped implement large-scale plans for the Metrorail Expansion Project, negotiate a deal with Comstock Partners for the ongoing downtown project and working with the Chamber of Commerce to establish an Economic Development Department.

She can also tout a number of projects such as approving the installation of lights along the portion of the W&OD Trail that runs through Herndon and installing gateway signs at each of the entrances to town.

Merkel recognizes that there have been challenges along the way. Among them have been getting the news of plans for the town out to the community effectively, and ensuring that Herndon retains its sense of community and the core of downtown while growing into a more urban area.

“It took several election cycles, but I’ve knocked on doors on every single street in Herndon,” Merkel said.

“It’s one thing to drive around town, another to walk up and down the street or ride your bike, but to walk up to people’s doors, you really get a glimpse for how people are living, and we have a very diverse town with a lot of needs. I’m really glad that I’ve gotten the chance to experience that.”