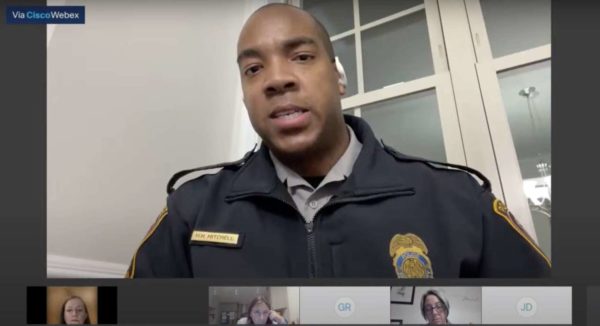 FCPD Capt. Thea Pirnat discussed that while there is an increased number of gunshot reports in the area, that doesn’t necessarily mean there are increased gunshots — it could mean that the community is doing a better job reporting data. However, the Reston District Police Department is still working to increase police visibility in the neighborhood to deter crime.

The department is also increasing patrols in the neighborhood through a crime suppression team, according to Lt. Marc Mitchell. The department has also been sending out bike patrols as an increased presence to help build trust and rapport with the community members.

2nd Lt. Erin Weeks discussed the current status of the homicide investigation, urging the community to come forward with tips or reports to help guide the active investigation. Weeks said that the detectives are actively following up on ledes and that she is “confident that we are going to solve this case.”

Jose Lorenzo Guillen Mejia, 24, of Reston, was found dead near a walking trail in the summer of 2019 near a wooded area between Hunters Woods Plaza and Breton Court. Mejia was found with trauma to his upper body and was pronounced dead at the scene.

PFC Katy Defoe, the Crime Prevention Officer at the Reston District Station, encouraged community members to pay more attention to their surroundings as they go about their daily lives so they can act as good witnesses if necessary.

Defoe also presented a series of contacts organized with the Hunters Woods Neighborhood Coalition that community members can keep in mind in emergent or non-emergent situations, including:

Another virtual town hall will be taking place on Feb. 4 at 5 p.m. with more details to come.