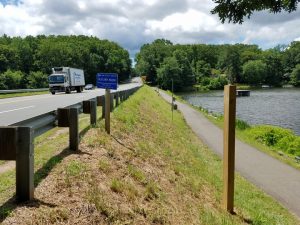 Conversations are underway to improve the safety of Lake Anne Dam, which currently does not meet state regulations for handling the largest flood considered when evaluating the dam’s performance.

The state’s Department of Conservations and Floodpain Management has called on Reston. Association, which owns the high-hazard dam, to submit an alteration permit application to increase the spillway capacity so it can manage a high-intensity flood, which is known as the Spillway Design Flood (SDF).

In a letter issued to RA on March 20, Russel Baxter, deputy director of dam safety and floodplain management and water conservation, told RA to submit the alteration permit by Dec. 31.

Construction work to boost the dam’s spillway capacity should be completed by the end of. 2021, according to the letter.

So far, RA has been issued a Conditional Operation and Maintenance Certificate because the dam currently does not meet state regulations. The certificate expires on March 31, 2022. RA has previously received conditional operation certificates as well.

But it’s unclear exactly how alterations would be phased out. Talks are underway to update the state’s dam regulations.

This year, RA’s Board of Directors deferred around $750,000 in funding to accommodate other pending projects in the fiscal year 2021 budget.

Larry Butler, RA’s Chief Operating Officer, told Reston Now that the association is waiting on the state to complete to determine what changes are made to state codes and regulations regarding dams and impounding structure.

“We have no alteration plans at present because we do not know how the code will change,” Butler wrote in a statement.

When the board met last month, RA’s CEO Hank Lynch noted that the state is working on seating a Technical Advisory Committee to review dam safety regulations.  Lynch said that many dam owners have expressed concerns about “recent changes to the regulations and the owners’ inabilities to satisfy the requirements, both technically and financially.”

“This action has been delayed because of the pandemic,”  Lynch noted.

It can take around two years for the committee to complete its work, which prompted staff to delay any capital funding until new guidance is in place.

In 2017, the state agreed to foot half of the $14,590 bill for a hazard analysis of the dam. High-hazard dams pose the greatest risk to life and property if they fail.