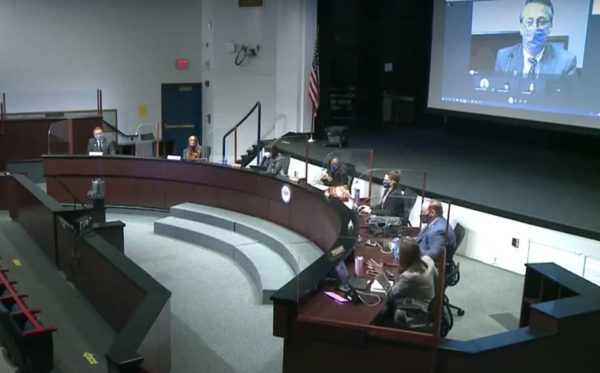 Fairfax County Public School administrators are looking to write a new policy that will ban secluding children across the division by 2023.

The new policy governing when and how children can be restrained or secluded would also require administrators to contact parents the day of an incident and to review data every quarter. After being restrained or put in a room alone, students would meet with a trusted staff member who could provide positive supports.

“We are delighted that FCPS recognizes that they were in shocking non-compliance with federal regulations,” Fairfax County Special Education Parent-Teacher Association President Michelle Cades told Tysons Reporter. “We are really optimistic that reporting is going to improve and that there is going to be more transparency.”

According to the policy, starting in 2021, seclusion will only be allowed at Burke School and Key and Kilmer Centers.

“We’re requesting that it be prohibited in 99% of schools now, but 100% is our desire, 100% is our goal,” Assistant Superintendent of the Special Services Department Michelle Boyd said in a work session last week.

The policy would go into effect Jan. 1, 2021, and includes some clauses that respond to feedback from parents and other stakeholders. FCPS will hold a public hearing on the new policy on Friday.

These changes come one year after a 2019 WAMU investigation found hundreds of instances of restraint and seclusion in FCPS, even though the school division had not reported a single incident to the U.S. Office of Civil Rights for 10 years.

“We have to make sure that people feel confident, not just in the new policy, but that we are implementing the data collection with fidelity,” Superintendent Scott Brabrand said during a Dec. 1 work session. “We have to acknowledge that for too many years, we reported no information, as did other school districts, and it was wrong.”

At-Large School Board Representative Abrar Omeish questioned what data FCPS is relying on to be confident that a new restraint and seclusion policy will be implemented properly.

“I worry about relying on this information, when we have reason to believe that it is not reliable,” she said. “We should imagine the worst-case scenario and put in place the checks that are going to hold us accountable to make sure we’re not wronging kids in the process.”

The school board and community members both raised concerns about an initial draft of the policy that was released prior to the Dec. 1 work session. That version gave a window for notifying parents of two school days, did not prohibit supine restraints (where the child is lying face-up on the ground), and had no explicit mention of eventually banning seclusion at all schools.

SEPTA criticized the initial proposal as failing to meet state regulations and best practices, saying that it “appears to discriminate against students with disabilities.”

“Given [the county’s] history, the public and the special education community of Fairfax County do not have faith that FCPS will act with integrity and transparency in any use of restraint or seclusion,” SEPTA said in a statement.

School board members argued that same-day notification in particular should be a priority.

“I can’t find that it is tenable that this school system is capable of notifying parents when there is a discipline issue or a health issue, but we’re not going to notify if their child has been restrained or secluded,” Braddock District School Board Member McLaughlin said.

The most recent draft of the proposed policy was released on Dec. 4 and incorporates some of the school board’s requested changes, including the same-day notification requirement and a ban on supine and prone restraints.

“They went back and, it looks like, put a lot more thought and consideration into how the regulations will be implemented here in Fairfax,” Cades said. “[Supine and prone restraints], where you have multiple people forcibly holding a child down on the floor, are more dangerous. You have a much greater likelihood of injury or death.”

Omeish said during the school board’s Dec. 3 meeting that she will likely be bringing a motion to “ban seclusion and to replace the rooms with sensory rooms.”

SEPTA is encouraging the community to register to speak at the public hearing. The group is facilitating anonymous participation ahead of the public meeting, where volunteers could read testimonies from parents.