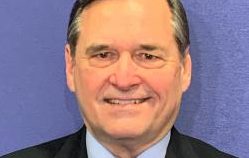 Rohrer’s top priorities, according to Sergeant Hudson Bull of Fairfax County Police Department, will be providing a smooth transition to the next Police Chief and ensuring “community safety.”

Responding directly to the accusation of low morale and rank-and-file officers’ continued skepticism of leadership, Bull noted that the new chief is working to dispel this notion.

“Chief Rohrer wants to make sure that community members, county employees, and officers are confident in the leadership of the department,” wrote Bull to Reston Now. “[He’s] focused on listening to officers and moving the department forward… Chief Rohrer is thankful for officers’ dedication and professionalism during these challenging times.”

FCPD declined a phone interview with Rohrer, noting that Rohrer is focusing on “providing a smooth transition for the next Chief of Police.”

In January, the Fairfax County Police Department selected Rohrer to take over for the county’s retiring police chief Edwin C. Roessler. He had been on the job for nearly eight years.

This isn’t new territory for Rohrer. He was previously Fairfax County Police Department’s chief from 2004 to 2012, when he was promoted to deputy county executive overseeing public safety. At that position, he oversees the department which consists of about 1,400 police officers.

He will remain deputy county executive even as he takes on this new responsibility.

“I work closely with Deputy County Executive Rohrer on a daily basis and I could not be more confident in his ability to see the Police Department through this period while we search for a new chief,” Fairfax County Executive Bryan J. Hill wrote in a statement to the Washington Post late last month.

Rohrer’s personality and management style, in 2012, was described as deliberate, not “flamboyant,” and hard-working.

While his tenure may be brief, it comes at a time when the department is in the midst of significant change.

During his eight years on the job, Roessler implemented nearly 200 reform efforts including body-cams for all officers, a citizen review panel, de-escalation training, and diverting some from jail who were diagnosed as mentally ill. Much of this was done in the wake of the 2013 fatal police shooting of an unarmed Springfield man.

However, it has come at the expense of morale and rank-and-file officers being skeptical of the leadership’s push to change. This became particularly acute after an officer was arrested for assault over the summer for using a stun gun and unnecessary force on a Black man who did not appear to be combative.

All of this, at least for the time being, is now at Rohrer’s feet.

Responding to a series of questions about his goals, why he took the interim job, and the challenges facing him, FCPD spokesperson Sergeant Hudson Bull wrote that Rohrer is prioritizing continuing the county’s reputation as being safe.

“Chief Rohrer wants to focus on ensuring that our County remains one of the safest jurisdictions in the country by supporting our officers and remaining attentive to the needs of our community members,” he writes.

Rohrer’s experience and institutional knowledge made him a perfect fit for this temporary job as the search for a replacement continues, notes Bull.

“The Chief’s vast experience in public safety provides him with insight and knowledge to be able to make the best possible decisions regarding important public safety matters for our community,” Bull writes. “His long tenure with Fairfax County gives him intimate knowledge of the public safety function that is provided within our county government.”

A nationwide search is currently underway for FCPD’s next Police Chief. It’s expected that the department will announce their selection in late March or early April.

Bull writes the department says the community will provide integral insight into this decision.

“Fairfax County is seeking the best possible candidate for its next Chief of Police and will be using several means to accomplish that goal,” Bull says. “Most importantly, input from our community members will weigh heavily on our decision making process as the County moves forward in its search.”